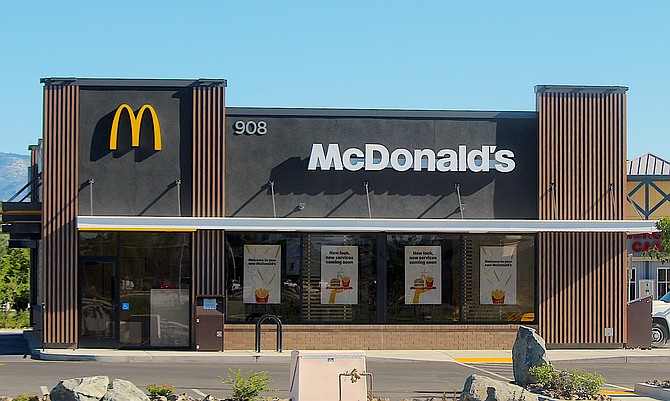 The Minden McDonald's will hold its grand opening on Friday.

The new Minden McDonald’s could be one of the busiest in the company in the first year after it opens on Friday.

One thing that will definitely contribute will be the improved access to the restaurant which replaces the one across Highway 395.

“I gave up trying to make a left turn out of that parking lot,” Kassity Management Group Director of Operations Clayton Burns said on Tuesday. “I would drive down and take a U-turn. It should improve safety significantly and you don’t get stuck waiting for traffic to clear.”

The new McDonalds is at the new intersection of Highway 395 and Santa Anita Boulevard, which will allow customers to take advantage of a turn signal.

The restaurant had a soft opening on June 14, which included the dining room for the first time since the coronavirus lockdown.

“We haven’t had dine-in or take-out in a while,” he said.

Being completely open, means the store has doubled the number of workers.

Customers to the new store will be able to order at the counter or use a kiosk.

In addition to the new building, Burns said there were several efficiencies behind the scenes, including a conveyor belt.

While McDonald’s Corp. owns the real estate involved, Kassity is the franchisee for 14 Western Nevada McDonald’s.

Burns, who lives in Carson City, is from Mammoth Lakes. He has worked for Chris Kassity for 11 years.

The restaurant is holding a grand opening 11 a.m. to 2 p.m. Friday with the first 50 people in line getting a free Big Mac a week for a year and the next 150 receiving any type of café drink once a month for a year. Anyone who comes by during the grand opening can obtain a raffle ticket for prizes, including children’s bicycles or a big screen television.

When the original Minden McDonald’s opened July 22, 1982, it was pretty close to the edge of town.

One thing residents won’t find in the new McDonald’s is the playland.

The heck with junk food. We need a good Indian restaurant.