Snow removal a sore spot for many 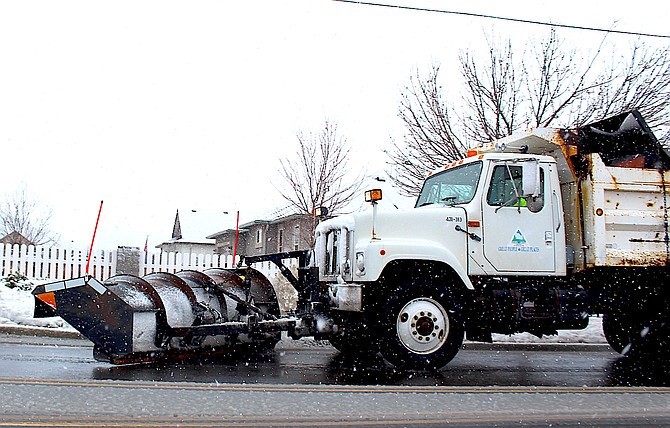 A Douglas County snowplow sands Buckeye Road on Tuesday to prevent icy conditions after most of the snow was gone. The big surprise New Year's snowstorm caught agencies across East Fork Township off guard.
Photo by Sarah Drinkwine.

With even more snow in the forecast this weekend, getting it off the roads has been a sore spot for residents across Douglas County, though recent warmer conditions and rain have reduced some of the challenges.

Snow removal within the county’s boundaries is handled by several different agencies ranging from the state and county to the various road districts and towns.

Generally, those agencies have an amount of snow that triggers a removal response.

“Normal snowfall (one foot or less) will be removed within 72 hours or as warranted and if personnel and equipment are available,” said county officials. “Douglas County currently has four large main plows with some smaller truck plows and heavy equipment and is responsible for plowing roads all over the county including Tahoe and Topaz-Holbrook areas. We maintain ap-proximately 220 miles of roadways.”

Because there are more than a dozen different agencies conducting snow removal across the county, the level of service can be different from one place to another.

The New Year’s weekend storm caught everyone by surprise when instead of rain more than a foot of snow fell overnight, leaving residents unable to leave their homes.

“I have lived here on the end of the steepest street in TRE for 36 years,” said John Flaherty. “I can say without doubt that our roads get passed by more of-ten than not when it snows. This past storm was no exception.”

Flaherty said he repeatedly tried to contact someone in the Topaz Ranch Estates General Improvement District office to get someone to plow the roads in his area but could not get through.

“The office numbers didn’t work because of the power outage,” he said. “There are two emergency numbers — one number didn’t go through and the other number said voicemail full. Absolutely no one was available to handle any kind of an emergency.”

The Record-Courier has made several attempts to contact the district.

A Gardnerville resident said a neighbor found someone to plow their street because no one else came out.

“They were very busy and in short supply,” said Gary Marshall. “Perhaps, the county could put together a list of approved individuals that could be called upon in these situations, also for mudslides and similar events.”

“We just had to write and tell you just how great GRGID has been removing the build up of our snow situation,” she said on Tuesday. “Today it was like seeing the movie ‘Groundhog Day.’ Then to our rescue came the snowplow. Last week it was a front loader.”

Once snowfall subsides and after arterial roadways have been cleared, clear-ing collector roadways, local streets and school bus routes is next.

Once arterial roads and collector roadways have been cleared, snow remov-al equipment will be deployed to county-maintained unpaved roads. Private roads are not sanded or plowed by county crew.

Snow is often plowed into berms, mounds of snow, which may seem incon-venient, but sometimes it’s difficult to avoid.

“When there’s excessive snow and little time for it to melt, the plows have nowhere to move the snow other than the side of the road and driveways,” according to the county. “

We understand that it can be difficult for residents and in these extreme weather circumstances, but the priority is often to clear all county roads as quickly and efficiently as possible.”

There are many different policies for snow removal which can be found by district or town. Gardnerville’s states that residents are responsible for the snow removal on sidewalks and mailbox cluster boxes must be clear to have mail delivered.

The point, many residents addressed in a Facebook post on community forums was that officials should address concerns and make resources more readily available in an emergency.

“Public Works was mobilizing crews for flood mitigation and had to quickly change gears to plowing and snow removal,” according to the county. “The county did put in additional requests for aid to the state but there is a challenge when surrounding counties are also dealing with similar weather-related circumstances limiting the resource pool. We did secure private contractors to assist with the heavy snow accumulation brought on by this series of storms.”