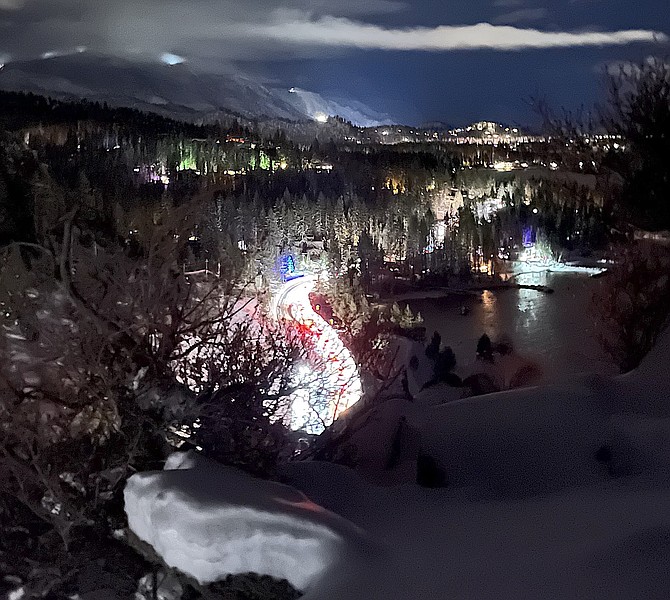 A river of cars winds toward Stateline in this photo taken from the top of Cave Rock on Dec. 28 by Ryan Curry

The debacle on Highway 50 drew most of the attention, but streets and highways across Lake Tahoe have been affected by the biggest storm of 2021.

As of Thursday, Tahoe City recorded 105 inches of snow, just an inch short of becoming the second largest snow fall since records started being kept in 1908. The total recorded near the mouth of the Truckee River beat out a 51-year record of 104 inches. Only 1931’s record of 114 inches is apparently unassailable on New Year’s Eve.

With three feet of snow falling in Tahoe City over Dec. 26-27, residents are wondering when their streets will be plowed, and officials around the basin are doing their best to clear the roads in a timely manner.

Nevada Department of Transportation spokeswoman Meg Ragonese said the Silver State only has half its usual complement of snowplow drivers, affecting Kingsbury Grade and Highways 50 and 28.

The same goes for the California Department of Transportation on the California side of the basin, which means multiple entities are clearing the roads with limited employees.

Currently, all plow drivers in the basin on both the Nevada and California sides are working 12 hour shifts daily, and many have not had breaks since before the storm and will not see another break for the coming weeks.

“We’re dedicated to keeping the highway safe for drivers with our existing workforce, and we do that by first prioritizing snow removal on our major thoroughfares, such as interstates and the highways.”

Most neighborhoods are plowed by one of the many towns or districts that surround the Lake.

Douglas County deputies and Nevada State Police have been aiding drivers stuck on Kingsbury Grade and other areas around the Lake.

Tahoe Douglas firefighters have reported several instances where they’ve responded to calls only to find vehicles blocking driveways or just stopped in the highway.

“Any other incidents they might run across include a disabled vehicle,” said Ragonese. “They need to help with that kind of thing. I would say that one of the biggest challenges we see on the roads is unsafe driving primarily caused by motorists who are just driving too quickly or not following the posted chain controls.

“What happens is the resulting disabled vehicles or crashes temporarily take out our snow mobiles or make them unavailable for snow removal as we try to assist those stranded motorists.”

Caltrans spokesman Steve Nelson explained that even though their teams are working 24/7 to reopen their portions of the highways as well, it’s difficult with obstacles in the road and the holiday rush of people attempting to leave and enter the basin.

“It was the imperfect storm during a holiday weekend,” said Nelson. “It’s a little bit different with the dynamic of this storm, with the winds and some of the trees down and power lines. So, there’s other agencies that have to get involved… it’s very challenging right now.”

Through the worst of Tuesday’s 35-mile traffic jam on Highway 50 from Spooner to Echo Summit, one issue was the giant berm down the middle of South Lake Boulevard, reducing the street to one lane.

Officials are predicting it will take over a week to get many of the roads back to the normal.

Snow berms are the linear accumulation of snow cast aside by a plow.

“There’s going to be pile up of snow,” said Washoe County Communications Manager Bethany Drysdale. “There’s just no way to not have that. But they’re doing the best they can, and they’ll keep trying to make things as accessible as possible. But it’s going to be difficult with this much snow.”

Check out the list below for more information about snow plowing in your area.