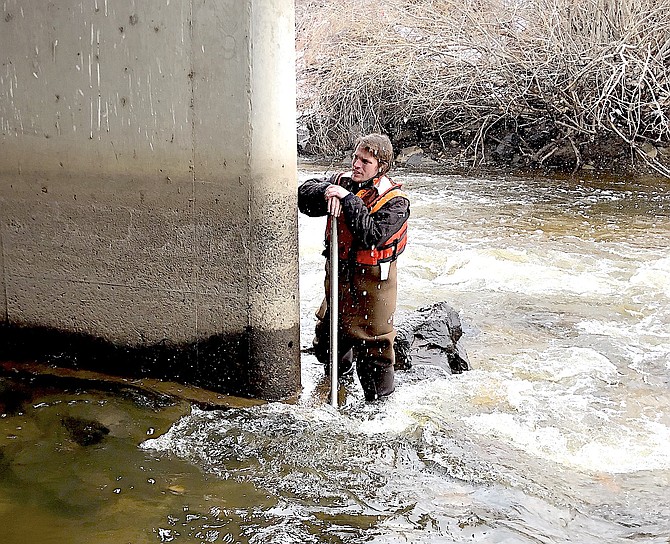 A bridge inspector works in Brockliss Slough where it crosses under Highway 88 south of Kimmerling Road. Nevada Department of Transportation photo

Bridge inspectors are donning dry suits to check for erosion from high water in Carson Valley this week.

They were below Genoa Lane where it crosses the Carson River on Wednesday morning and have checked where Highway 88 crosses Brockliss Slough.

Ragonese said those bridges have experienced flows higher than the inspection plans of action.
“Using dry suits and diving gear, inspectors dive underwater to visually and manually inspect underwater bridge piers and abutments,” she said. “Inspectors will be looking for any heavy flow-related impacts to the bridges, as well as any potential erosion of the riverbed around bridge piers and abutments created by fast-moving waters.”

Ragonese said the inspections were expected to wrap up by Friday and the state wasn’t anticipating extensive damage.

“But, if found necessary by the results of the underwater inspections, improvements to reduce scour, such as large rocks (known as rip rap) placed in the riverbed near bridge piers or abutments, could potentially be made in the future by the local or state agency which owns and maintains the bridge,” she said.

The state conducts inspections of the bridges every two years. Nevada’s bridges have been named best in the nation for eight consecutive years.

The East Fork experienced near action stage levels of water both during New Year’s Eve and on Monday, but there are no reports that the river overtopped any major roadways.

During the heavy rains in winter 2017, Cradlebaugh and many other Carson Valley bridges were closed as state excavators fished logs out of the river to keep the bridges safe. While flooding closed some local roads, that was the result of tributaries or sloughs filling up with rain and snowmelt.