Weekend closure will drive detour around 88 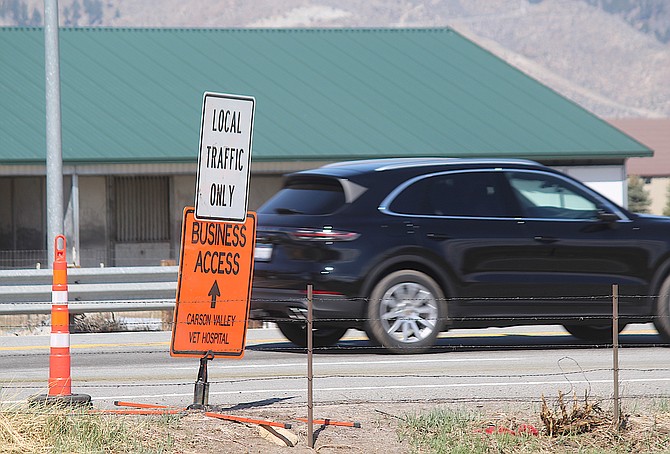 While Highway 88 will be closed at Waterloo Lane and the roundabout just south of Minden this weekend and next, people will still be able to reach Carson Valley Veterinarian Hospital and the Dangberg Home Ranch.
Photo by Kurt Hildebrand.

Highway 88 is a popular route north for Gardnerville Ranchos residents seeking to avoid traveling through downtown Minden and Gardnerville.

However, road work will close the highway between Waterloo Lane and County Road this weekend and next.

Douglas County is closing the road to install large box culverts that will carry Cottonwood Slough across the road, just south of Minden.

That means motorists who make roughly 12,000 vehicles trips a day through there will have to find an alternative.

One of the reasons the closure is occurring over the weekend is to avoid traffic associated with Douglas High School during the week.

The obvious detour for those residents would be to take Centerville to Gilman Avenue to Highway 395 in downtown Garnerville.

Centerville Lane to Foothill Road is open over the weekend, but it’s still under construction.

Work on state highways through Carson Valley is expected to be relatively light this summer with two major overlays, according to Nevada Department of Transportation spokeswoman Meg Ragonese.

A third of a mile of Muller Lane between Highway 395 and Foothill Road is scheduled for a 3-inch slurry with a chip seal on the rest this summer.

The fast lanes of Highway 395 between Waterloo Lane and Douglas Avenue is also getting a “mill and fill” over the summer.

A project to resurface the highway from First Street in Minden to Waterloo Lane in Gardnerville is awaiting relocation of multiple underground utilities and isn’t expected to begin until spring 2023.

The highway is scheduled to be resurfaced between Topaz and Leviathan Mine Road in summer 2022.