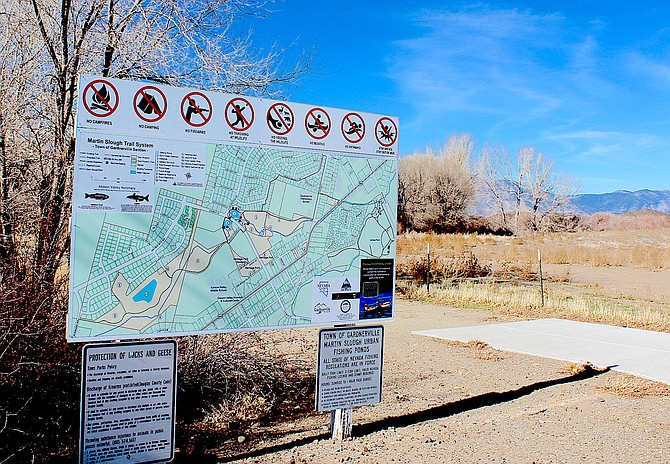 The south entrance to the Martin Slough Trail in Gardnerville in November, not long after bids were opened that could finally see work on the trail to Minden.

Bids were opened on Tuesday to construct 1.86 miles of the Martin Slough Trail north of Gardnerville and Minden.

The engineer’s estimate was $1.247 million, Hutchens said Tuesday. The bid award isn’t final, but it is a step along the way to building the trail that has been in the works for around a decade and will connect the urban ponds along Gilman Avenue with Jake’s Wetlands.

According to the bid document, the trail will be multi-use and 10-feet wide.

Completion of the trail coincides with Minden’s work on the Seeman Ranch Park east of Buckeye Road.

The park is centered on Seeman Pond, which the county turned over to Minden several years ago.

Bids for the park came in at $1.3 million, or nearly twice what the town had budgeted for the project.

Town Manager J.D. Frisby said cutting a proposed dog park out of the project will bring it to just over $1 million, which is still more than the town budgeted, but attainable.

The Town Board approved moving forward without the dog park, though both Board members Bill Driscoll and Steve Thaler said they wanted to bring the dog park back at a future date.

One of the originators of the project, former Town Board member Matt Bernard, said he felt it was important the town move forward with the park citing two large donations made a year ago.

There wasn’t any argument from the town board, who decided to delay work on Bougainvillea three months into the next fiscal year to make up the difference.

Resident Bob Pohlman said that he anticipated the work on the road would be delayed until next summer after the work wasn’t done this year already.

Minden received $457,000 in donations toward improvements proposed for the park. With the town budgeting $350,000, that should bring the Seeman Pond very close to fully operational.

As envisioned, the new park will feature a bridge over the inlet from the Heybourne Ditch, a floating fishing dock, and a larger parking lot at the Buckeye Trailhead.

Frisby said the town has already purchased the self-contained restrooms, which cost $132,000, leaving the town $675,000 available for the park.

In Gardnerville, on the other end of the Martin Slough Nature Trail, are the two Gilman Avenue ponds, built in 1998. Most of the trail work will be funded by Question 1 funds.

Both Martin Slough and Cottonwood Slough, located south of the two towns, are part of the Carson Valley’s irrigation system that predates the founding of Minden and Gardnerville.

The sloughs transport water from the East Fork of the Carson River starting along the east edge of the Gardnerville Ranchos and returning to the river west of Minden.