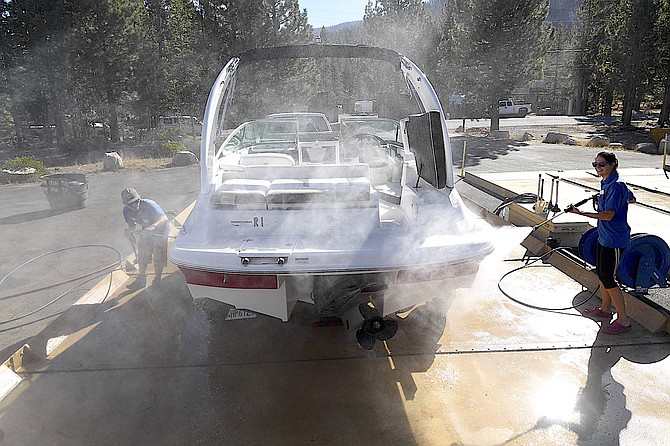 Less than a percent of the 5,800 boats, jet skis, and trailers inspected this year had invasive species onboard, less than half the number found last year.

Of the 56 vessels found to have invasive species onboard, eight of those were carrying quagga or zebra mussels, making this one of the lowest years on record for intercepting the prolific invader.

Last year was one of the highest years ever, with inspectors intercepting 132 vessels with invasive species and 28 of those carrying quagga or zebra mussels. The high number of discoveries triggered an expanded outreach effort to boaters nationwide.

This month, watercraft inspection services made their seasonal move closer to the lake through April 30 next year. Inspections are available during daylight hours at Lake Forest boat ramp in Tahoe City from 8 a.m. to 6 p.m., and Cave Rock boat ramp in Glenbrook, from 6 a.m. to 4 p.m. Vessels needing a decontamination, including all watercraft with ballasts, must call ahead. Visit tahoeboatinspections.com or call (888) 824-6267 for more information.

Since the mandatory watercraft inspection program began in 2008, more than 100,000 boats have been inspected and there have been no new invasive species detected in Lake Tahoe. A critical component of the program is an effective boater education campaign to ensure vessels, trailers, and gear are Clean, Drained, and Dry before entering the Tahoe Basin, according to the agencies.

Around 30 percent fewer boats came through the inspection stations this year than last, likely due to higher fuel prices and unfavorable weather early in the season. However, the number of invasive species detections dropped by 73 percent. Boats need to undergo a thorough decontamination process if there are signs of mud, plants, animals, or water found during the inspection process, or the boat has a ballast system such as a ski or wake boat. Boaters continue to do their part with more than 50 percent of watercraft arriving clean, drained, and dry, further reducing the risk to the Tahoe Region.

“Strengthening partnerships and adding innovations increases efficiency and further reduces the threat to Tahoe,” TRPA Aquatic Resources Program Manager Dennis Zabaglo said. “Our collaborative approach and focus on helping boaters are part of the reason Lake Tahoe’s program has become a model program in the nation.”

Earlier this year, the U.S. Fish and Wildlife Service announced a cooperative agreement with TRPA to fund high-priority Lake Tahoe Aquatic Invasive Species Program projects, including removal of Eurasian watermilfoil, public outreach and education, and investments in permanent inspection stations. A total of $17 million from the Bipartisan Infrastructure Law will be available over the next five years, with $3.4 million in the first year. The U.S. Fish and Wildlife Service is also engaging the Washoe Tribe of California and Nevada to support Tribal leadership and involvement in the Lake Tahoe program.

Equipment upgrades and infrastructure improvements, such as securing permanent inspection stations, are also important to the program’s success.

Since 2010, inspectors have annually set up and broken down three to five regional inspection stations, each requiring separate permits and agreements with landowners.