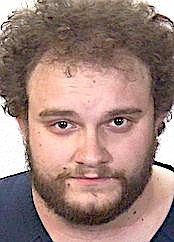 A single-vehicle rollover early Sunday morning resulted in the arrest of an off-duty Douglas County prosecutor.

The collision occurred at around 1:12 a.m. at Highway 395 and Topsy Lane, according to District Attorney Mark Jackson. Douglas County deputies contacted the driver of the vehicle, Michael Hanley, 26, of Gardnerville.

“The deputy observed signs of intoxication and Hanley admitted to consuming beers around 12:15 a.m,” Jackson said on Sunday morning.

Hanley submitted to a field sobriety test and a portable breath test that revealed his blood alcohol level as .143 percent BrAC, according to a statement.

“Hanley was arrested for DUI with no prior and booked into the county jail,” Jackson said.

He has been employed with the District Attorney’s Office for six months.

Effective immediately, Hanley is no longer employed with the District Attorney’s Office, Jackson confirmed, saying his office has a zero tolerance policy for DUI offenses.

“Mr. Hanley’s decision to drink and drive put himself and others at risk,” Jackson said. “His own lapse in judgment while off-duty should not be a reflection on the other hard working, ethical and committed prosecutors in my office who work tirelessly in bringing justice to victims on a daily basis. I commend the Douglas County Sheriff’s Office for their investigation and arrest in this case.”

Jackson stated that a special prosecutor from the Washoe County District Attorney’s Office will be appointed to prosecute the case in Douglas County.