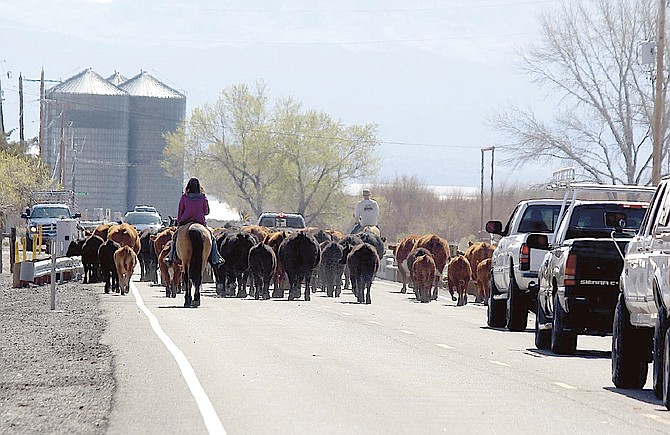 This April 16, 2021, photo of a cattle drive down Genoa Lane won for best feature photo at the Nevada Press Foundation's annual awards dinner in Las Vegas on Saturday.
Photo by Kurt Hildebrand.

Coverage of the Tamarack Fire that cited both the staff of The Record-Courier and Douglas County’s residents was recognized with the Nevada Press Foundation’s community service award on Saturday night in Las Vegas.

“Awesome coverage of a terrible tragedy,” judges from the Arizona Press Association said. “The notes from readers … really told the importance of the local media coverage.”

A combined Jan. 15 edition of the Nevada Appeal and The Record-Courier was cited in judge’s comments in naming the capital city paper the best rural publication in Nevada.

The sister publications, which have published a joint weekend edition since 2003, were named the first and second best rural publications in the state.

In awarding general excellence to the Appeal, judges cited the heft of the twice weekly paper.

“A big paper,” the judge said. “Lots of features, many comics (both color and black and white), and space for content, even a coloring page for kids. A prime example of what local newspapers should be.”

“The inclusion of readers’ photos of the fire is good thinking and well put together,” judges said. “Plentiful, good and relevant news content.”

For the second year in a row, The R-C won the rural award for best editorial pages, which listed its readers as a key contributor.

Hildebrand also received the first rural award for coverage of underserved communities for his stories about the Minden siren.

Hildebrand’s obituary for Virginia Henningsen, news photo of the Jacks Valley Fire and feature photo of the Parade of Lights all won third places.