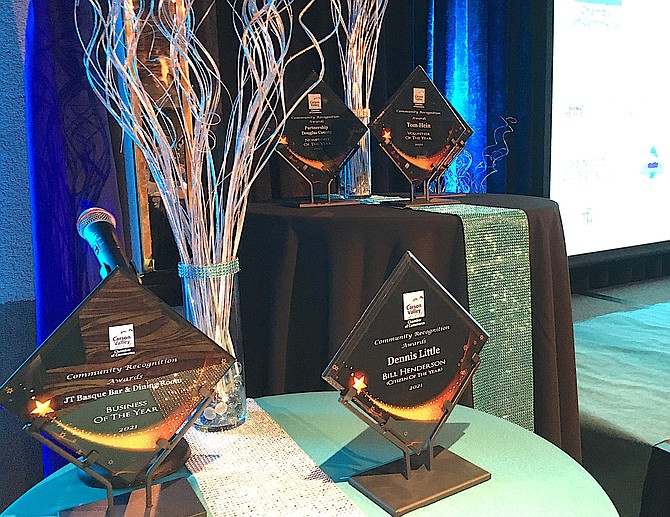 The Community Recognition Awards await their new owners at Saturday's banquet sponsored by the Carson Valley Chamber of Commerce and The Record-Courier. Kurt Hildebrand photo

In the fire year of 2021, a firefighter was recognized as volunteer of the year by the Carson Valley Chamber of Commerce.

Hein is a career firefighter who retired to the Valley in 2017.

“He’s one of the few guys who answers that 2 a.m. call for a structure fire or to a sheriff’s incident,” Lang said. “His history in the fire service lends itself to helping all the volunteers.”

There are 60 volunteers representing the eight volunteer fire stations that were once the backbone of East Fork in Carson Valley.

“Many of these volunteers have served literally for decades and deserve to have a little sunshine thrown their way,” Hein said through Lang.

Partnership Douglas County was named nonprofit of the year by the chamber.

While the Partnership has served the county for decades, testimonials at a video presentation focused on the nonprofit’s aid to the Tamarack Turnaround.

Turnaround committee member Adele Hoppe said that thanks to the Partnership, the group that raised more than $80,000 for 11 families made homeless by the fire that burned into southern Douglas County, didn’t have to go through the process of filing as a nonprofit.

“They provided a place to donate, monitored all the funds coming in and allowed us to work to put together a great big fundraiser,” Hoppe said. “Without them we couldn’t have done that.”

Douglas County Animal Services Supervisor Liz Begovich was named employee of the year by the chamber.

The shelter served as an evacuation center for 73 pets from the Tamarack Fire and 233 from the Caldor Fire.

It is one of the first in Nevada to support a no-kill shelter, Community Services Director Scott Morgan said.

“Through her and her volunteers, everyone returned home safely and in good spirits,” Chamber Director Alicia Main said.

J.T. Basque Bar and Dining Room co-owner J.B. Lekumberry couldn’t resist offering a little Basque lesson to the packed dinner at the Carson Valley Inn in Minden, pointing out that the first syllable of his last name is pronounced “Lek,” not “Luke.”

“The Lekumberrys have proven there’s an appreciation for old ways done right,” Main said in her introduction.

Cooperative Extension Coordinator Lindsay Chichester credited the restaurant for having the best picon punch in Gardnerville.

Citizen of the Year Dennis Little spent Saturday at the Carson Valley Museum & Cultural Center working on programs for the next year.

Little has been a volunteer at the former Douglas County High School since before it opened as a museum in 1995. He served as president of the Historical Society for two years.

The Chamber Recognition Awards are sponsored by the chamber and The Record-Courier. This is the 14th year in the current iteration, though there has been some sort of awards banquet every year for decades.