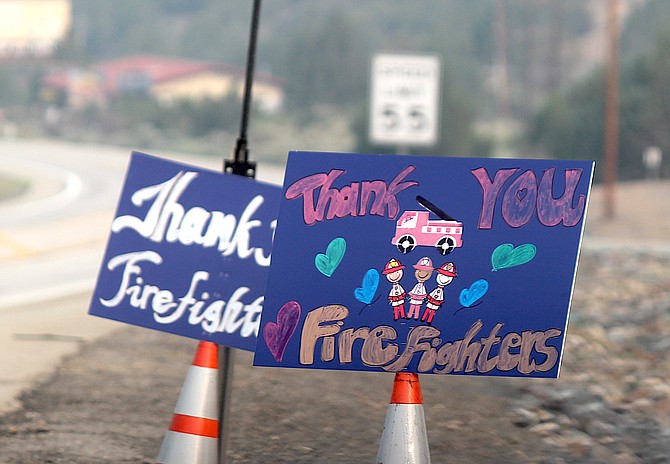 Signs thanking firefighters have sprung up along Highway 395 in the Pine Nuts after the Tamarack Fire.
Photo by Kurt Hildebrand.

Genoa, Nev. — The Tamarack Fire grew 1,359 acres over the past 24 hours, or about 2 percent as firefighters got a line around 54 percent of the fire, whose cost to fight is now up to $17.7 million to fight, according to this morning’s National Interagency Coordination Center’s situation report. The fire is at 68,103, or 106 square miles.

Tamarack evacuees are returning to their homes and even those that are still standing will require some labor to clean up freezers and refrigerators after more than a week without power in Alpine. There are still 124 homes and businesses in the Highway 395 corridor without power. The estimate is 8:45 a.m. today, but fixing those lines is a big job.

Monday afternoon’s thunderstorm and a lessening of smoke from the Tamarack Fire decreased the air quality at 6 a.m. to moderate levels at the Ranchos Aspen Park monitor. The trend is for it to remain stable this morning.

Visibility at Minden-Tahoe Airport stayed above 8 miles all night with mostly calm winds. It appears from the smoke maps most of our haze is coming from the north today.

With Highways 395 and 88 open, expect some additional traffic through Carson Valley today as travelers make their way through to other locations. A guy stocking bread at a Gardnerville store on Saturday told me it was the slowest he’d seen, showing how much eastern Sierra residents rely on Carson Valley for victuals.

The Douglas County Public Library Board of Trustees is meeting at 10 a.m. today to interview and perhaps select an interim Library Director. The meeting will be conducted in the library’s meeting room.

I got a 20th of an inch of rain in my gauge north of Genoa, if you count the dead bug and some ex-leaves. As usual for thunderstorms, they managed to miss the gauges.

We had several lighting strikes in Carson Valley on Monday afternoon, including one less than a mile from the office at around 3:25 p.m. that shook the rafters.

The odds of thunderstorms today are 20 percent with isolate showers and thunderstorms after 2 p.m. The high today is forecast to be 88 degrees with the wind 5-10 mph out of the west gusting to 20 mph.