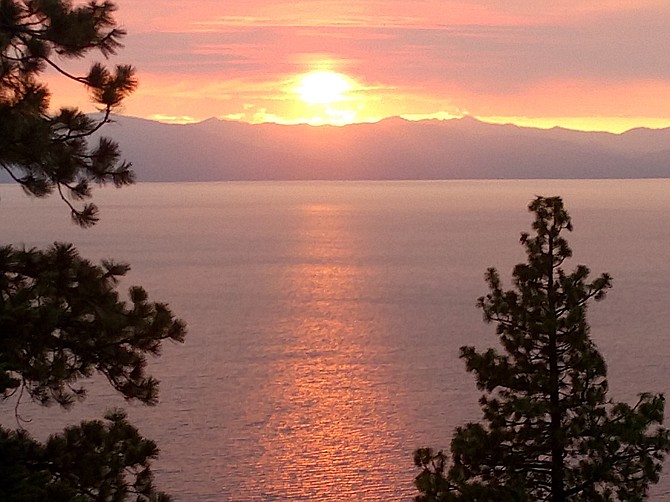 Smoke from the Tamarack Fire turns the sunset to orange over Lake Tahoe on Sunday evening in this photo taken by resident June Shafer.

Genoa, Nev. — A thunderstorm cleared out some of the smoke over Gardnerville on Monday, pushing it toward the west side of Carson Valley. It rained briefly in Gardnerville and Minden, measuring only a trace in the county seat. This morning the air quality index is at 170 or unhealthy.

Visibility increased at Minden-Tahoe Airport overnight, but is starting to degrade, going from 8 miles at 4:35 a.m. to 5 miles at 6 a.m. The smoke has hampered aerial firefighting on the Tamarack Fire, limiting it to helicopters and single-engine air tankers.

There’s a 3,000-acre difference this morning between the Inciweb report on the Tamarack Fire and the Nevada Fire Information map, which lists 42,000 acres as of 4:30 a.m. I’m going with the larger estimate for now, because the fire isn’t contained, which means it’s likely keep growing.

Event with the lowball number, the Tamarack Fire has more than doubled the size of the Washington Fire which burned 17,800 acres and threatened Markleeville in June 2015.

The Library Board of Trustees is scheduled to meet 10:30 a.m. today to discuss filling the position of library director in the wake of Amy Dodson’s resignation. The item is broad enough to appoint an interim director. The board will meet in person at the library, 1625 Library Lane.

This is an important date for those of us who grew up with the space race. July 20, 1969, marks the anniversary of man landing on the moon and 45 years since the Viking 1 lander set down on Mars. I was 15 and had consumed a steady diet of science fiction through my misspent youth.

It’s forecast to be smoky through 8 a.m. and then hazy before 11. The Zephyr will pick up out of the west at 10-15 mph this afternoon gusting to 25 mph.