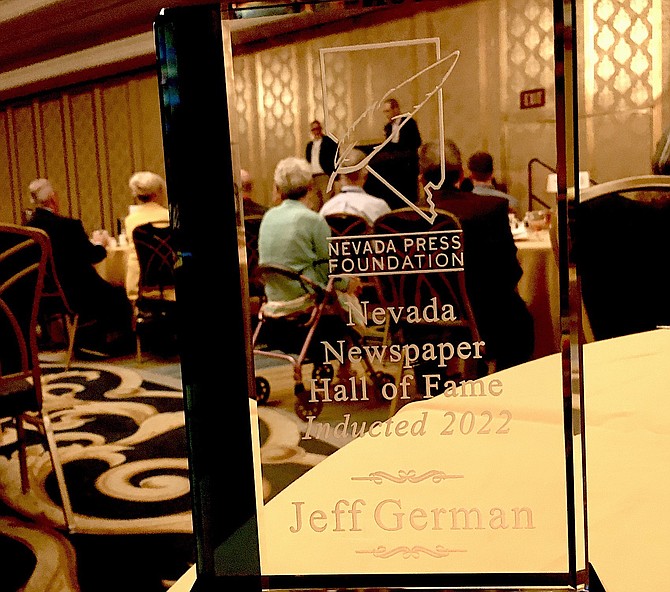 The luncheon crowd offered a standing ovation when German’s name was called.

​Donate on behalf of Jeff German​​​

German was stabbed to death at his home on Sept. 2. One-term Clark County Public Administrator Robert Telles was arrested five days later in connection with the death. Telles lost the Democratic primary after German revealed several issues with the office.

“By all rights, Jeff should be standing here himself to receive this award and we all know why he isn’t,” Review-Journal colleague Steve Sebelius told the crowd.

Sebelius said that as far as he was concerned, German had earned his entry into the Press Hall of Fame, which includes Mark Twain, years ago.

Sebelius said he met German, when he was working for the Las Vegas Sun.

“He came in every day chasing the big story,” Sebelius said. “His mantra was ‘it’s big’ to describe his latest story. It became a catch phrase in our little group. ‘Jeff? Is it big?’ we’d ask him and he’d always confirm, ‘It’s big.’”

Sebelius said German would never give up on a story and when someone told him that some public official would get away with something, he’d reply “‘Don’t worry, Jeff is on that case. He never ever gives up. He’s like a dog with a bone.”

“Jeff was murdered — murdered for the work that he spent his entire life pursuing up until the very end.”

The conference was held at the Westgate Las Vegas and was sponsored by Southwest Gas.

The annual dinner and awards banquet was Saturday night.