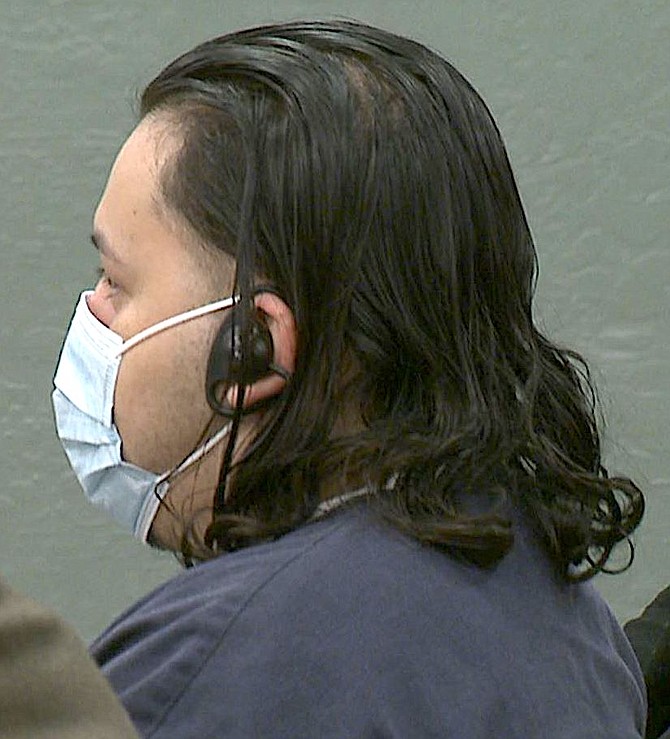 Wilber Martinez-Guzman wears headphones to hear his translator at his arraignment on murder charges in Douglas County District Court on Nov. 9. Photo by Wade Barnett/KOLO-TV

Wilber Martinez-Guzman, 22, received the maximum sentence on two murder charges with a firearm enhancement on Monday.

In addition to the murder charges, he also was sentenced to the maximum for stealing the pistol he used during a two-week killing spree.

Martinez-Guzman is still to be sentenced in the murders of Gardnerville Ranchos residents Connie Koontz on Jan. 9 and Sophia Renken on Jan. 13 in their homes a few blocks apart.

The shootings put Carson Valley residents on edge for the nine days before he was finally captured.

Koontz’s death started the murder spree that Guzman would later tell detectives was spurred by a desire for drug money.

It was Koontz’s Apple iWatch that provided a key clue to tracking Guzman down. He tried to power it up from his mother’s address which led Carson City Sheriff’s investigators to arrest him on Jan. 19, 2019. He has been in custody ever since.

He faces two life sentences without possibility of parole with a deadly weapon enhancement when he appears before District Judge Tom Gregory on Thursday.

The admitted spree killer who murdered Gardnerville Ranchos residents Connie Koontz and Sophia Renken in their homes in January 2019 is scheduled to be sentenced in Washoe, Douglas and Carson City district courts next week.

The two women were shot as they answered their doors on Jan. 10 and Jan. 13 by a man who had stolen a gun from a Reno couple, he murdered a few days later.

Wilber Martinez-Guzman, 22, is on the court calendar to be sentenced by Washoe District Judge Connie Steinheimer at 9 a.m. Monday where he faces two life sentences in the Jan. 15-16 murders of Reno residents Jerry and Sherry David.

He’s due for sentencing on the Ranchos murders on Thursday in Douglas County District Court and on a variety of lesser felonies in Carson City on Friday.

District Attorney Mark Jackson said he expects to require the entire day for sentencing on Thursday to give the families an opportunity to provide impact statements.

Under Nevada’s victim impact statement law, family members have an opportunity to testify about how the crime affected them.

Under an agreement with prosecutors, Martinez-Guzman will seek the maximum sentences in all three hearings, though the actual sentence will be up to the judge.

By the end of the week, he could be incarcerated for four life terms without the possibility of parole in addition to another 28-70.

Martinez-Guzman entered guilty pleas in all three jurisdictions and is asking for the maximum on all charges in order to avoid the death penalty for the murders.

After a Nevada Supreme Court ruling that Martinez-Guzman would have to be tried separately in both Washoe and Douglas on the murders, family members told prosecutors they were ready to see the cases closed.

Martinez-Guzman is being represented by the Washoe County Public Defender’s Office.

Under the agreement, Martinez-Guzman’s attorneys won’t be permitted to introduce mitigating evidence at the sentencing.

Should Martinez-Guzman withdraw from the agreement, Jackson said he will seek the death penalty.

Jackson said there were 10,000 pages and 1,000 hours of audio any new defense team would have to go through before they could adequately represent Martinez-Guzman.