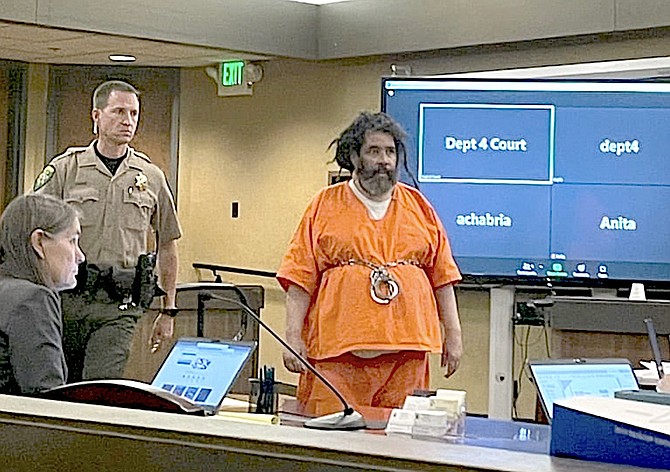 The 1985 brutal stabbing murder of a newspaper columnist that saw one man wrongly serve 15 years in prison concluded on Tuesday when the actual killer received up to life in prison.

Michael Green, 54, was sentenced to 15 years to life for the murder of El Dorado Hills journalist Jane Hylton.

The same DNA evidence that exonerated the man convicted of the murder in 2005, wound up resulting in Green pleading guilty to the murder.

Hylton’s family was torn apart when her daughter, Autumn Solbrack, was implicated during the initial investigation of the murder, with two other individuals, by the investigators of El Dorado County.

Ricky Davis was living in his grandmother’s El Dorado Hills home with his girlfriend Connie Dahl, as well as Hylton and her daughter Autumn in July 1985.

In Solbrack’s victim impact statement, she said “aggressive, confession driven detectives” used pressure to induce a false confession from Connie Dahl. This confession was then used to convict Dahl’s then boyfriend Davis. Neither of them had any hand in what Solbrack called the violent, vicious and animalistic murder of her mother.

Davis maintained his innocence for the entire 15 years he was in prison and was only recently exonerated thanks to advances in forensics. In February 2020, Davis was cleared by genetic genealogy. Dahl admitted a charge of voluntary manslaughter and testified against Davis, who was serving a prison sentence for bank robbery.

Dahl, who received a year in prison after her guilty plea, died of a methamphetamine overdose in 2014.

Davis received $480,000 in compensation from the state in 2020 and filed a lawsuit against El Dorado County.

“The why [it happened] and how different my life could have been will haunt me forever,” daughter Heather Purvis-McConnell said. “My mother can finally rest in peace, let the healing begin.”

“I want to know what he would feel or what he would say to the person who stabbed your mother 29 times,” she said. “What would you do if you received an early morning call to tell you ‘Your mother is dead.’ We will always have something in common, regretting the stupid decision you made 37 years ago.”

Hylton’s son Ian Purvis echoed his sister’s experiences and pain. The family shares recurring nightmares exacerbated by this continuous uncertainty and the “Crooked finger of blame” pointed at his sister Autumn.

“All the words we say will never bring my mother back.”

The defense presented an argument that due to Green’s age at the time of the murder as well as the lack of violence historically before and after the murder, he should be considered for probation.

Green was a high school student at the time of the murder.

Defense attorney Margaret Huscher presented testimony from witnesses to Green’s childhood, some of whom maintained relations with him into adulthood, as well as Green’s ex wife.

Deputy District Attorney Jay Linden read a statement on behalf of the family.

“You beat her, she had numerous blunt force wounds about her head and face, by your own words you kicked her jaw, you bit her on the shoulder why was that? Was she trying to get away from you? You took out your knife, opened your blade and then you inflicted 29 sharp force wounds, she was stabbed in her head, she was stabbed in the neck, the front, and the back. She had defensive wounds on her hands and arms and tried to keep you from murdering her. You didn’t just kill Jayne that night but destroyed numerous other lives as well. Jayne was 54 years old, and here you are the same age she was, when you killed her.”

Prior to delivering a 15-to-life sentence, Kingsbury encouraged Green to use all the resources at his disposal in the California department of rehabilitation.

“I have found that closure is a myth,” Kingsbury said. “Both sides will have to make their own closure, I hope that everyone is able to heal as best as they can. I have no doubt that’s what your mom would have wanted.”

While she was not involved in the initial case, she wanted to apologize on behalf of the county to the family for all they endured.