Chautauqua features Will and Alice James 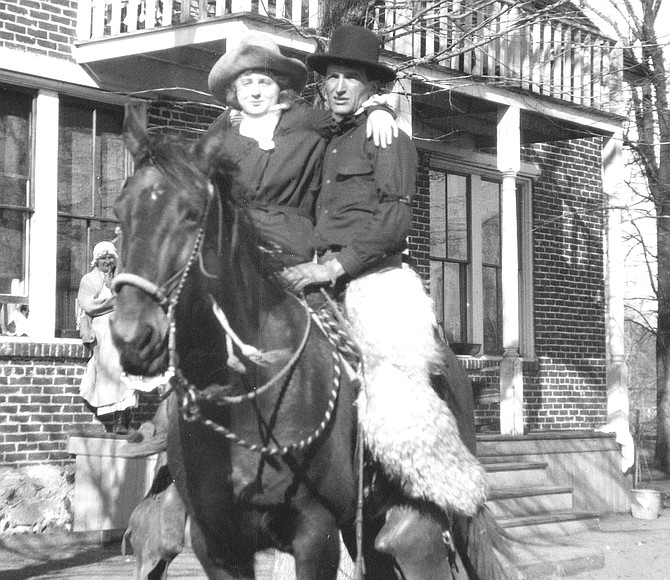 Will James and wife Alice in Reno.

A member of the Nevada Writers Hall of Fame, cowboy chronicler Will James had four of his books turned into movies, with one “Smoky, The Cow Horse,” filmed three times.

A Chautauqua featuring Mike Olson as James and Kim Harris as wife, Alice is 7 p.m. Saturday at the CVIC Hall in Minden.

Horse Tales Publisher Sharon DeCarlo is president of the Will James Society, whose mission is to preserve and spread James’ legacy.

“(Olson and Harris) have put an enormous effort and many hours into researching and studying these two historical figures,” DeCarlo said in an article appearing in the May edition of Horse Tales.

The event will include cowboy poets Richard Smith and Harold Miller, who have composed works about James.

Proceeds from the event will go to scholarships for one boy and one girl who are seeking a career in something related to ranching or creative writing and art.

Born June 6, 1892, as Joseph Ernest Nephtali Dufault in St. Nazaire de Acton, Quebec, Canada, James changed his name and came to the United States around 1910, according to his Hall of Fame biography.

He was arrested for cattle rustling in Nevada and served a sentence in 1915-16, where he took care of the prison’s horses.

One of his earliest drawings, called “The Turning Point” was included in his request for parole.

According to the Hall of Fame, he worked as a stunt man in Western movies and served in the Army from 1918-19.

“His western drawings and short stories began to appear in national magazines, including Red Book, Saturday Evening Post, and Scribner's Magazine,” according to the Hall of Fame. “The Drifting Cowboy, a collection of magazine stories, settled him as a professional writer and enabled him to buy a small ranch on Franktown Road in Washoe Valley, where he and (Alice) lived from 1923-1927.”

“Smoky, The Cow Horse” is his most most famous work, which won the coveted Newberry Medal for children's literature in 1927 and has been made into several movies. James narrated the 1933 film. The novel won the Lewis Carroll Shelf Award, given by the University of Wisconsin, in 1965. His “autobiography,” “Lone Cowboy,” was a Book-of-the-Month Club selection and bestseller. Gregory Peck starred in the 1971 movie adaptation, “Shoot Out,” according to the Hall of Fame.

James was living and writing in a cottage on the Godshall Ranch in Victorville, Calif. when he died on Sept. 3, 1942, at the age of 50.

The Will James Society, a 501c3 organization, was formed to preserve and promote the legacy of James.

There will also be a silent auction featuring rare Will James books, Western items, horse tack and framed posters, prints, and some original western art.