Wednesday collisions tie up traffic across the county 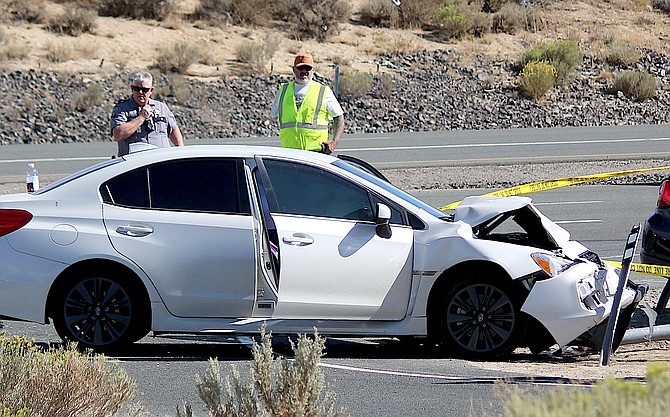 A white sedan has its front end crunched after a multiple vehicle collision on Highway 395 just south of Topsy Lane.
Photo by Kurt Hildebrand.

Four people were injured across four hours in four separate crashes from one end of Douglas County to the other on Wednesday.

A motorcyclist was helicoptered to Roseville, Calif., for treatment after he reportedly went 20 feet down an embankment off Highway 208 just east of Holbrook Junction at around 6:10 p.m.

Reno was socked in with smoke from the Mosquito Fire, so Care Flight went to the California hospital instead.

Three people were transported from a multiple-vehicle collision 2:15 p.m. that backed up traffic on Highway 395 past the intersection with Interstate 580.

Northbound traffic was delayed as passing motorists checked out the wreckage. Drivers diverted into the parking lot of Carson Valley Plaza in search of a way around the wreck, which was located at the top driveway above the Best Buy. Nevada State Police troopers had the highway shut down to one lane as tow trucks cleared the wreckage.

A sedan, a Subaru and two large pickups were involved in the collision.

A tow truck was loading the tractor at about 5:55 p.m. when the call came in for a T-bone collision just north of the intersection with Highway 88.

No one was transported for treatment from the collision, but both vehicles had to be towed.

Collisions are being investigated by the state police highway patrol division. The Record-Courier has reached out to find out more.