Drivers failing to yield cause in three crashes 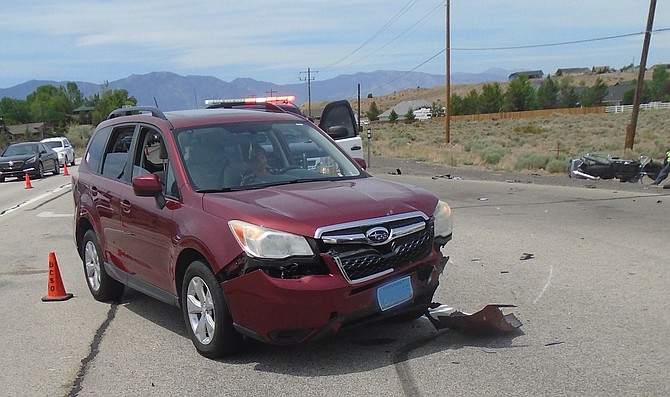 A motorcyclist received major injuries when a Subaru failed to yield on June 16.

At least four people have been injured over the last month after motorists failed to yield to oncoming vehicles on Highway 395.

A motorcyclist was helicoptered from a collision at Highway 395 and Palomino Lane in Ruhenstroth after the driver of a Subaru Forester failed to yield on June 16.

The rider of the Harley Davidson was northbound and tried to evade the Subaru but the two collided and he was ejected from the motorcycle, according to the Nevada Highway Patrol.

The rider was helicoptered to Renown Regional Medical Center.

With next week’s long holiday weekend, the potential for crashes is expected to increase

Highway 395 saw two collisions on the same day the Friday before the Memorial Day weekend.

More than 2,000 Gardnerville homes and businesses were without power after the collision knocked a power pole into a building.
Shortly after power was restored to Gardnerville, a second collision resulted in two people being transported for medical treatment.

At around 8:30 p.m., a 2018 Sierra pickup was in the northbound turn lane on Highway 395 at Plymouth Drive when the driver pulled out in front of a southbound Toyota Prius.

The pickup driver was helicoptered for treatment and cited for failure to yield. The driver of the Prius was taken for treatment via East Fork ambulance.

In the lead-up to next week’s long July 4 weekend, the Nevada Highway Patrol is participating in a regional effort to slow motorists down through Sunday.

“As the nation opens up and more people hit the roads, law enforcement will be proactive in helping bring speeds and subsequent crashes down,” according to the NHP. “The partnership established by the Western States Traffic Safety Coalition is initiating a coordinated speed education and enforcement campaign across western states starting on Friday and concluding on Sunday. These dates were chosen to help prevent risky driving behaviors leading into the July 4th holiday.”

The coalition consists of a dozen state patrol agencies, including all those surrounding Nevada.

“During the early months of the pandemic, driving patterns and behaviors changed dramatically as people drove less often and less far,” according to the coalition. “Even with those dramatic changes, many who did hit the road were driving faster and more recklessly. Coalition members have seen the consequences of this trend firsthand, most notably a surge in vehicles travelling at 100 mph or more. Excess speed is a major factor contributing to serious and fatal crashes for drivers of all ages, along with speeding-related vehicle rollovers.”