One helicoptered from collision south of Gardnerville 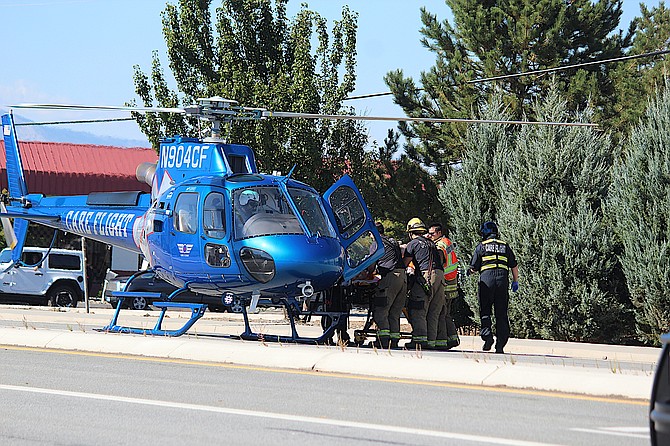 East Fork medics help load a motorcyclist into the Care Flight helicopter that landed on Highway 395 on Thursday afternoon.
Photo by Kurt Hildebrand.

A motorcyclist was helicoptered from a collision at Highway 395 and Charlotte Way that was reported 2:52 p.m. Thursday in Gardnerville.

Care Flight helicopter landed in the northbound lanes to pick up the rider while traffic was diverted down Charlotte around to Grant Avenue.

The collision involved the motorcycle and a Ford Escape.

The motorcyclist was taken to Renown Regional Medical Center.

It was one of two collisions within 13 minutes of one another that snarled traffic on the highway.

One person was taken to Carson Valley Medical Center for treatment from a collision across from the entrance to Kings Lane at 2:39 p.m.

The rear-end collision involved a Hyundai and Nissan, according to radio traffic.

East Fork medics and firefighters, Douglas County deputies and troopers from the Nevada State Police responded to the wrecks.

The state police are in charge of the investigation.