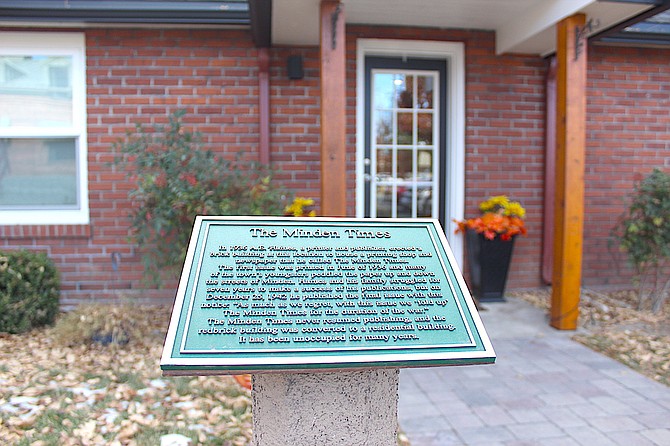 This historic marker for the Minden Times, which has been gone for 80 years. The R-C expects to move its offices to Minden with an opening sometime after New Year's.
Photo by Kurt Hildebrand.

For the second time in 120 years, The R-C is moving out of a building built specifically for the newspaper.

As of the end of the week, we’ll be vacating the former Record-Courier Center while we prepare a new home that will see us leaving Gardnerville for Minden.

That transition won’t be easy or particularly quick, with estimates that we’ll reopen the office sometime after the first of the year.

In the meantime, we’ll continue to cover Douglas County, put together The R-C and get a print edition out to our readers.

In 1899, when George Smith built the Eddy Street home for The Courier, the present Douglas County seat didn’t exist.

That led to the collision that wound up with The Courier getting an extra name after a fire claimed the Gardnerville Record in 1904. That merger might have resulted in a move to Minden, had it been there. However, it would be another two years before H.F. Dangberg Jr. was able to start work on the town.

The R-C moved into the center built where Miller’s Market once stood in 1996, after nearly a century on Eddy Street. First designed to be the new home to the press, the 1995 purchase of the Appeal in Carson City rendered that plan moot.

While it will be the first time The R-C, or any of its direct ancestors has published out of Minden, it won’t be the first newspaper to serve the county seat.

That honor belongs to A.E. Haines, who published The Minden Times from 1936 to 1942 out of a red brick building along Railroad Avenue. Haines sold Carson City’s Nevadian Times (not a typo), in 1935 and moved to Minden.

Haines became somewhat famous when he was socked in the jaw by Ormsby County Draft Board Chairman Archie Pozzi on Sept. 26, 1941, over articles published in the Times. Haines accused Pozzi of favoritism in classifying Haines’ son, but not classifying his own son for the draft. It turns out that wasn’t particularly true, since Pozzi was required to recuse himself from decisions involving family. If only Haines had done the same.

Pozzi pleaded guilty and was fined $5 by Judge Hickey after explaining that both draftees were classified.

Haines shut down the times at the end of 1942, saying he planned to return at the end of the war. Here we are 80 years later, making good on that claim.

Kurt Hildebrand is editor of The Record-Courier and will be doing most of his work from Genoa over the next few weeks. Contact him at khildebrand@recordcourier.com or 775-781-0351.