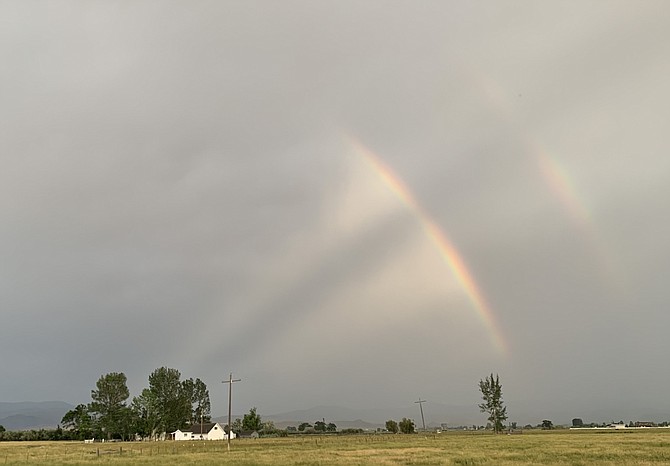 Mottsville resident Dr. Steven R Graboff took this photo of a double rainbow on Tuesday evening in his first submission to The Record-Courier.

Genoa, Nev. — The Sierra Front Interagency Dispatch Center received 10 reports consisting of four smoke checks and a half-dozen fires during Tuesday evening’s lightning storm. There were several lightning strikes last night, including one near Dresslerville and another in Johnson Lane.

Thunderstorms will be back around 2 p.m. today, with a greater chance on Thursday. Expect gusty winds and perhaps even a little rain as storm cells rumble by.

The excessive heat warning has been lifted by the National Weather Service but expect high temperatures to continue to be warm throughout Western Nevada. Today’s forecast is down to 94 degrees dropping to 93 on Thursday in Minden.

Two projects are going before the Genoa Historic Commission 7 p.m. at the Genoa Town Hall. Daniel’s Restaurant owner Lois Wray is seeking to install a gate between the Town Offices and the Country Store. The other project is the replacement of the balcony railing at the Genoa Courthouse Museum.

I’m hoping to hear from the Nevada Highway Patrol today about Saturday’s fatal crash off Highway 88 just south of Minden. The victim was ejected from the vehicle, according to personnel on scene. The wreck closed the highway for an hour or so.

The R-C is conducting its move into the old East Fork Gallery spot in The Record-Courier building this week and we hope to be open next Tuesday barring complications.