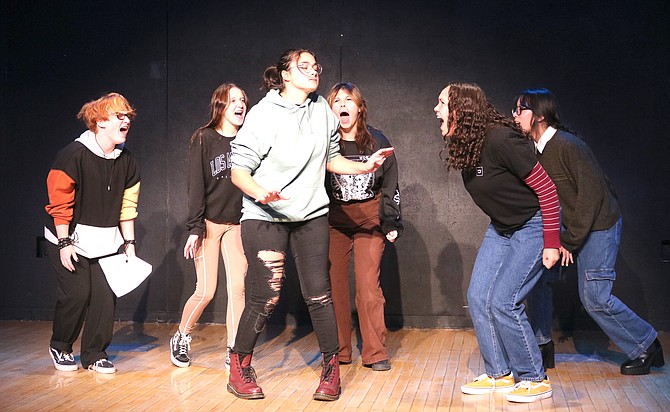 In “Body body,” Madeline, (center, portrayed by senior Peter Rivera) is bullied by the parts of the body she hates the most, portrayed by seniors, Zoey Cerda, Jordan Washington, sophomore Ashlyn Qinn and freshmen Jordin Johnson and Finn Jacobson.
Photo by Sarah Drinkwine.

Seventeen-year-old Madeline has let the parts of her body she hates the most bully her and sabotage her life, but she’s ready to fight back in “Body Body,” Douglas High School’s One-Act Thespian production opening 7 p.m. Friday.

“It’s such an important message for high school students, because so many deal with bullies and end up feeling bad about their bodies and eventually turn to unhealthy coping mechanism,” said the director of the play and senior Samantha Rollins.

Written by Lindsey Price, “Body Body” follows a teenage girl suffering from years of body shaming from herself and others that ultimately lead to her believing that she is fat and ugly. Throughout the play, parts of her body come to life and bully her further until she has no choice but to fight back and stand up against her biggest critic, herself.

“Madeline is insecure and has a binge eating disorder,” said Senior Peter Rivera who portrays Madeline in the play. “She’s watched her sister go through something similar and even looked up to her, but eventually Madeline doesn’t want to live that way anymore and faces her traumas and insecurities head on through reflection and learning from them.”

Rollins said that for her second time in the director’s chair, she felt this play had an important message.

“There’s not many plays about eating disorders or this type of message about body image and bullying, so, I wanted to direct it and help get the message out that it is a very serious thing and not something to joke about and that many go through it,” said Rollins.

She has been in drama since her freshman year at Douglas High School and enjoys directing dramas that share important messages. Last year she directed “Admissions,” a journey through grief and death.

“I like doing serious dramas,” said Rollins. “It’s harder, but they send a message. My favorite part is being able to spread awareness.”

Senior Zoey Cerda who portrays Madeline’s chin and sister and the tummy portrayed by senior Jordan Washington said the message is important to anyone who watches.

“I think it’s important to bring awareness to eating disorders,” said Cerda. “I don’t think it’s talked about enough and often times it just gets worse.”

Washington said it’s been healing and eye opening for her.

“As someone who has been in the wreck of body image struggles, I think it’s very important to love yourself no matter what and to not listen to what others say or what you see, but to learn to love everything about you,” said Washington. “It’s been real healing to be a part of this play and send such an important message.”

Also staring in the production are freshmen Jordin Johnson and Finn Jacobsen and sophomore Ashlyn Quinn. Fable Farnworth is co-directing.

“Be advised it comes with a trigger warning,” said Rollins. “There is bullying, body shaming, and eating disorders mentioned and portrayed.”