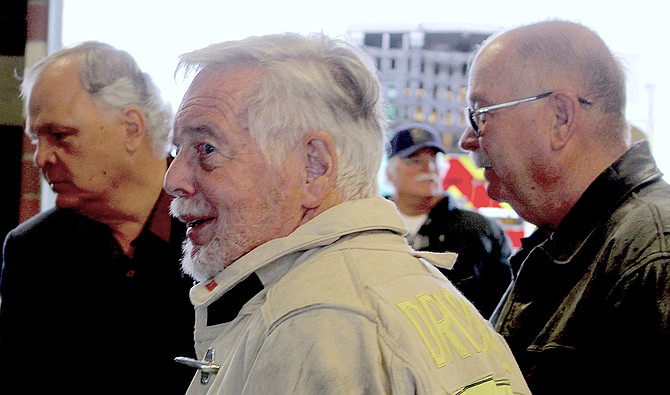 In 1981, Driscoll took over the district within months of its creation. He was handed the task of stitching together what were essentially eight different fire departments with 200 volunteers.

“When I arrived on the scene, on the very first day I had a meeting with a gentleman named Danny Hellwinkel,” Driscoll recounted at East Fork’s 40th anniversary celebration on Saturday.

Driscoll said he had many conversations with Hellwinkel during those early years, many of which started “Driscoll, you got my dander up this time.”

Colescott said it was a decade at East Fork that prepared her to be secretary to the county manager.

Each of the eight departments were a separate corporation and was responsible for raising its own funds.

Many events that started during the early days of the fire departments, like the Topaz Lake Barbecue or the Fish Springs Spaghetti Feed were critical to funding equipment for the volunteers.

East Fork Fire Protection Board President Jacques Etchegoyhen grew up in Minden. He recalled riding his bicycle downtown with his friend Alan Biaggi in March 1964 when he estimated the town’s population was only around 250 people.

“As we road our bicycles up, we saw something we would never expect to see as 6-year-olds,” he said. “They were wheeling bodies into the CVIC Hall in downtown Minden.”

The hall on Esmeralda Avenue was used as a temporary morgue for the bodies of 85 people who were killed when Paradise Airlines Flight 901A from San Jose to Lake Tahoe crashed into Genoa Peak on March 1, 1964.

“Debris and bodies were strewn across a quarter mile,” Etchgoyhen related. “The volunteers in Minden, Gardnerville and Genoa went up and for days retrieved bodies and brought them to the CVIC Hall. The volunteers at that time were up to the task, and it’s upon those shoulders that we now stand. I think this district has deep and strong roots coming out of this area’s rich history.”

In the intervening years, the district has gone from three paid staff to 69 professional firefighters, Chief Tod Carlini said.

“We’ve seen every organizational challenge be met with great success,” Carlini said. “Sometimes with great consternation internally and other times with strategic ease. Our successes outnumber our failures, but it’s our failures that have led to more successes.”

As part of the ceremony, Driscoll exchanged his white chief’s turnouts for an embroidered hat and a challenge coin. Colescott was also honored with a hat and a coin.

After the speeches, the district conducted an engine housing or push-in ceremony celebrating new Engine 12.