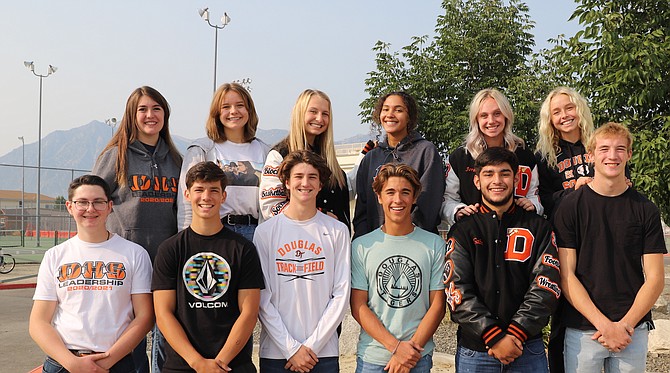 Douglas High School’s Homecoming Fall Fest event is going to be “worldwide” fun at Minden Park Wednesday as students from band, FFA and sports rally together as the homecoming king and queen nominees.

“We are excited to get back to normal,” said Douglas High School Activities Director Karen Lamb. “We are getting back to traditions with nominees and parade and everything in between.”

“It’s especially fun because people are wanting this kind of thing to come together and after Covid, we haven’t done it for a few years, so it’ll be fun to have everyone together again,” said Delange.

Homecoming will kick off with a parade and Olympic themed floats the Homecoming king and queen nominees will ride down Esmeralda Avenue.

Each float will be decorated in the Olympic ring colors.

“It was a cool way for us to incorporate the worldwide theme of homecoming, this year,” said Delange.

The community is encouraged to attend and watch the parade and enjoy performances from Jose Julian Carrera from the high school’s Ciendo Heritage Club and the cheerleader team’s dance to rapper Pitbull’s “Fireball” along with games, including a corn hole, spike ball, volleyball and more. Food trucks and other vendors and booths from Douglas High School Athletic clubs and Paw-Wa-Lu and Carson Valley Middle schools’ leadership clubs will also be set up around the park.

“We will also have a big ‘thank you’ sign for our firefighters, that people can come sign,” said Delange.

“We’re looking forward to it all coming together,” said Depaz. “It should be fun for everyone.”

The homecoming nominees are looking forward to the events planned during homecoming week.

“It’ll be fun when we can dress up each day and dance at the pep rally,” said senior queen nominee Jordan Dekruyf.

“And hopefully get a laugh out of everyone,” said senior king nominee Grady Forensdorff.

King and Queen couples will perform in front of their peers during a competition dance off at the pep rally Friday.