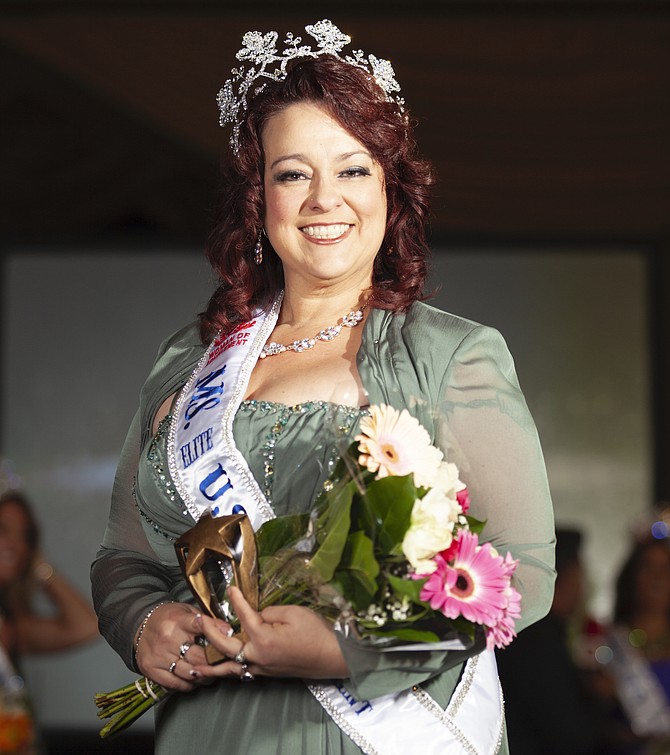 Ramos received her title at the Woman of Achievement Pageant event in Rosemead, Calif., In September.

The pageant is a national competition for women over 21 who are active and have achieved success in their community, charities, education, performing arts and leadership. The Curvaceous title was new to the 2021 pageant.

“I told her (Martin) how proud I was that she branched out to this community of people,” said Ramos. “It was such an incredible feeling to be a part of.”

Ramos said there aren’t many plus-size pageants as it’s all geared toward “the perfect image” according to society. The Curvaceous title gives bigger-sized women a space to express themselves and compete on the same level as other pageants.

“It shows women of all sizes that it’s OK to love you for you,” said Ramos. “You don’t have to go by society’s expectations and be the ‘perfect,’ ‘beautiful’ image you see on TV or in magazines.”

“I’m going to be 50 and to be a part of this world renounced pageant is an amazing feeling,” said Ramos. “I learned a lot more about myself in the pageant system than I ever could. My confidence level is through the roof because if it.”

Ramos’ platform is “Body Size Acceptance, Learning to Love Yourself from the Inside Out.” She focuses on educating women and men of all ages to understand who they are on the inside and not worry about the outer shell.

“People have to love themselves, from their heart, mind and soul before they can love their outer shell,” said Ramos. “Unfortunately, there is no Cosmo or Vogue or anything like that, that have articles about body positivity when you’re a plus size. It’s all about losing weight, being healthy and being thin. And that’s what the majority of society sees. They don’t ask questions or take the time to understand the plus size world.”

Ramos said you can be plus-size and still be healthy and beautiful.

“Just because you are overweight, doesn’t’ mean you are unhealthy,” she said. “There could be so many contributing factors like health, a medical condition or even weight gain because of a medication or it’s just someone’s dispensation.”

Through her platform and experiences Ramos does everything she can to help others understand more about themselves and love themselves from the inside, out.

“I tell men and women all the time, to just be themselves,” she said, “and to help them improve their confidence it can be as simple as waking up one Saturday and getting dressed up for no reason, but just to make yourself feel better. If you did that often, over time you’ll start to feel fabulous because you’re doing it for you and that’s all that matters.”

The Woman of Achievement organization is a platform-driven speaking tour and pageant. Participants are judge based on an interview of their past and current academic, community and career accomplishments as well as a platform in which they will support a charitable cause. Other judging criteria includes lifestyle in fitness, speech or talent and evening gown presentation.

“I am so honored to be a part of Woman of Achievement and to be representing all of Northern Nevada,” said Ramos.

Ramos encourages others to participate.

For information about Woman of Achievement Pageant visit www.womanofachievement.com.

Ramos said she is also available for questions and information about the pageant or for speaking and public appearances, email franny33@gmail.com