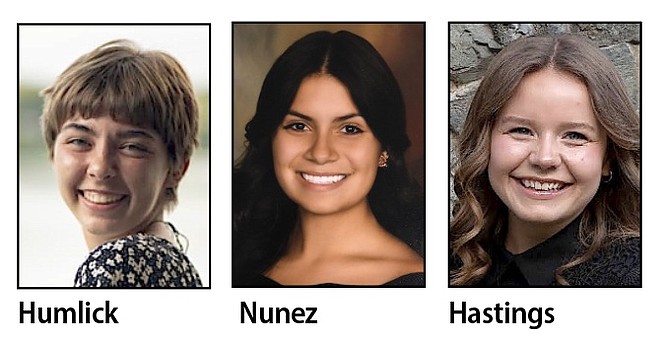 “In addition to consideration of academic achievement, community involvement, and financial need, applicants were required to write an essay drawing from the Democratic credo,” organizers said. “There was a theme running through this year’s essays. All four scholarship winners chose to focus on the Democratic Credo statement: ‘At the heart of our party lies a fundamental conviction that Americans must not only be free, but they must live in a fair society.’”

Lila Humlich attended Whittell High School and is going to the University of Nevada, Reno.

“Women are tenacious enough to pursue anything they put their minds to, but past prejudices will still be evident,” Humlich wrote. “As a woman and future STEM major, this field will be challenging, but I am determined to face this adversity head on and bring equality to this field.”

“If we are to work against discrimination, we can finally learn to embrace all of our differences as they don’t make any person inferior or less important but rather, they allow humanity and our nation to have beautiful culture and understanding of all the beauty every story has to tell,” she wrote.

“Seeing the ideal of a fair society challenged by various ideologies is a worrying prospect, and I believe that it is our moral imperative as citizens to uphold the values of equality and freedom.”

Hastings is attending Brigham Young University and her interests include pre medicine and political science.

Douglas High graduate Ruby Jacobsen wrote an essay about the importance of the 14th Amendment, comparing one’s family history to a quilt, which some can wear as protection while others struggle to hold on to

Applications for 2022 scholarships are distributed to high schools in October and will be due in April.

Democratic Women meet monthly, usually the first Monday, for a luncheon and program.