Lead holds for school board challengers Burns, Jansen and Dickerson 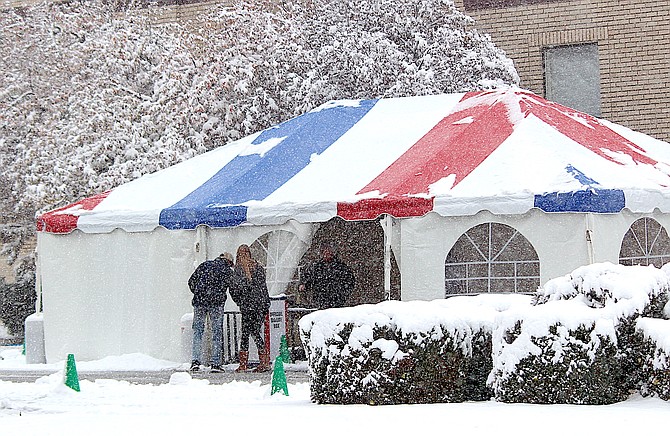 Results showed Dickerson’s lead over school board trustee Heather Jackson narrowed slightly, as did Burns’ lead over Roberta Butterfield. Jansen widened the gap between her and two-term trustee Robbe Lehmann.

Thanks to the Veterans Day holiday, Nevada election officials now have until Monday for voters to cure ballot signatures, Burgans said.

She said there are 1,000 or so ballots left to count plus whatever valid ballots arrive in the mail on Saturday.

Most of the paper ballots being prepared for counting on Friday arrived on Election Day.

Clerk-Treasurer Amy Burgans said around 6,000 ballots were dropped off on Tuesday, amounting to almost 15 percent of the electorate.

“I hope to have some really substantial numbers,” Burgans said. “I don’t even know who’s winning, I’m so busy. My priority is to get them put in there and then we can dive into the numbers later.”

There were 6-7,000 ballots still to process on Friday morning, which won’t be released until after The Record-Courier’s noon press time on Friday.

Today is the last day ballots postmarked Nov. 8 may be received at the Clerk’s Office through the mail, though that has not been a major source. Of the 100 that arrived on Thursday, half of them were postmarked Nov. 9, which means they were rejected.

With a significant number of paper ballots on Friday, the results of the 2022 General Election remain a mystery for several candidates.

As of the Wednesday afternoon, Douglas had counted 22,218 votes. Another 7,000 votes would bring the county to a turnout of 29,000 votes or a turnout of almost 72 percent, on par with prior year mid-term elections.

Preliminary results gave majorities to the three school board challengers that only eroded slightly with the addition of results of 899 paper ballots on Wednesday afternoon.

It will likely be Monday before final preliminary results are determined. County commissioners are scheduled to canvass the vote 4 p.m. Nov. 18.

The Republican slate of state candidates with Adam Laxalt at the top of the ballot swept Douglas County, as expected due to its large Republican majority.

But even those numbers indicate there are a lot of results out there that have yet to be counted.

However, the equivalent of about 75 percent of 20,945 Douglas Republicans voted for Rep. Mark Amodei, who is so far the most popular among the Republican candidates.

On the Democratic side, Attorney General Aaron Ford was the most popular candidate with 7,652 votes, or the equivalent of 95.5 percent of the counties registered active Democratic voters.

Ford issued a statement on Thursday declaring victory in his statewide race.

Republican Ken Gray defeated Democrat Janice Noble 15,069 to 6,514 in Douglas for the Assembly District 39 seat being vacated by Jim Wheeler. Gray had 21,989 votes to Noble’s 9,046 in the district that represents Douglas and part of Lyon counties.

Robin Titus ran unopposed in the general after defeating Wheeler in the Republican primary.

The six-way race for three seats on the Indian Hills General Improvement District board had Robert Stulac, Vicky Lufrano and Robert Garcia in the lead, but only 31 votes could change the results.

In Topaz Ranch Estates, only seven votes stand between third-place Lisa Sandbo and fourth-place incumbent Gerald Clark. Michael Tanner is in the lead with 379 votes and Kaitlyn Insell is in second with 340.

All three of the ballot questions were defeated in Douglas County by a margin sufficient to indicate that will be the electorate’s final word.

However, they fared far better statewide, according to the Nevada Secretary of State’s Office.

All of Douglas County’s constitutional officers ran unopposed in the general election, including both county commissioner candidates.

The Record-Courier will update this story at www.recordcourier.com as more results are released.