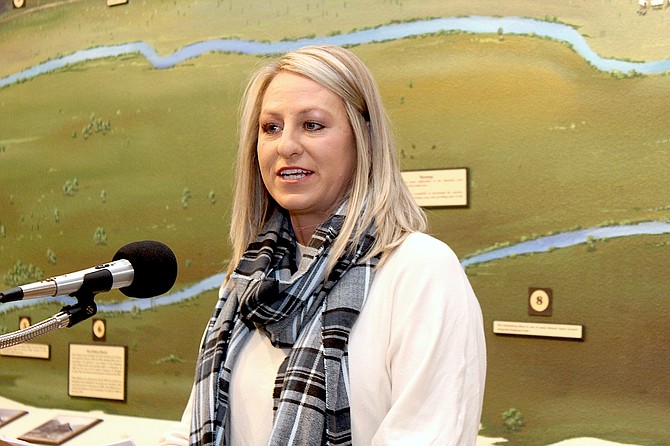 All three women were nominated in 2020, but because of the coronavirus outbreak, their induction into Women in History was delayed until last weekend.

Mary Sarman Stephans talked about her grandmother Elizabeth Schulz Rabe and her mother Lois Rabe Sarman at the event held at the Carson Valley Museum & Cultural Center in Gardnerville.

“Lizzie” Rabe was born to German immigrants in Clear Creek on Dec. 1, 1888. She received an education degree from the University of Nevada, Reno, and taught at the Centerville school, where she met William Rabe.

The pair married in 1917 and worked the ranch located along Mottsville Lane, regularly visiting the family cabin at Lake Tahoe.

She enjoyed spending time at the cabin, where the family donated a portion of their land to the 4-H camp.

Stephans said she would pick up drink glasses people had tossed out along the road.

“She once stopped a Greyhound bus, threw in a bag of garbage, and told the bus driver to take it back to California.”

She was a member of the Literary Society and past president of St. Gall Alter Society

She played basketball for Douglas County High School, and graduated in 1938.

Like her mother, Sarman graduated from the University of Nevada, Reno.

But she didn’t become a teacher after graduating in 1942. Instead, she joined the war effort working at the Army Supply Depot in Oakland.

Near the end of the war she married classmate Edwin Sarman, who was a radio operator in the Army Air Corps in 1945. The couple raised seven children.

Barbara Indiano was born March 23, 1931, in the yellow house that still stands in the S-Curve in Gardnerville. She spent her entire childhood on Mission Street.

“She was a true town girl growing up,” granddaughter Kaycee Summers said. “She was the first homecoming queen at Douglas High School, where she was a cheerleader, drum majorette and played on the girls basketball team.”

She worked at the old Tarry Tavern and served as a switchboard operator for the phone company.

She was student body secretary at Douglas County High School and an excellent bookkeeper and could take accurate dictation at the rate of 80 words per minute.

Indiano received her secretarial diploma at Reno Business College and went to work for an insurance firm. In January 1952, she accepted a position at the Farmers Bank of Carson Valley in Minden.

She married Johnny Indiano on Nov. 8, 1952, and she moved to the Heybourne ranch with John and his parents. She quickly became a true ranch wife and mother.

“They raised chickens on the ranch in the 1950s and grandma would candle the eggs for size and fertilization before she sold then to the Minden Mercantile,” Summers said. “The chickens that didn’t produce eggs were destined for the chopping block.”

That was easier said than done.

“You know the old saying about running around like a chicken with your head cut off,” Summers related. “She learned the hard way that was so true.”

During lambing season, bummer lambs were taken into the house and kept warm by the incinerator.

“While she was bottle feeding her young children, she also had to bottle feed those lambs,” Summers said.

After her children grew up, she worked part-time for Douglas County and served on the county election board for a quarter of a century.

She was a lifelong member of St. Gall Catholic Church and active in the Women’s Society and the Carson Valley Women’s Literary Club. She died Jan. 4, 2018.

In the 21 years since the historical society started its Remembering Project, it has recognized 143 women in honor of National Women’s Month.

Reid said that of that number, easily 50 could have been included among women in agriculture.

The society limited attendance in this year’s event to immediate family members.

They thanked A Wildflower for the arrangements presented to Summers and Stephans, Ellen Caywood, society volunteers and former President Dennis Little.

The historical society operates the museum in Gardnerville and the Genoa Courthouse Museum.