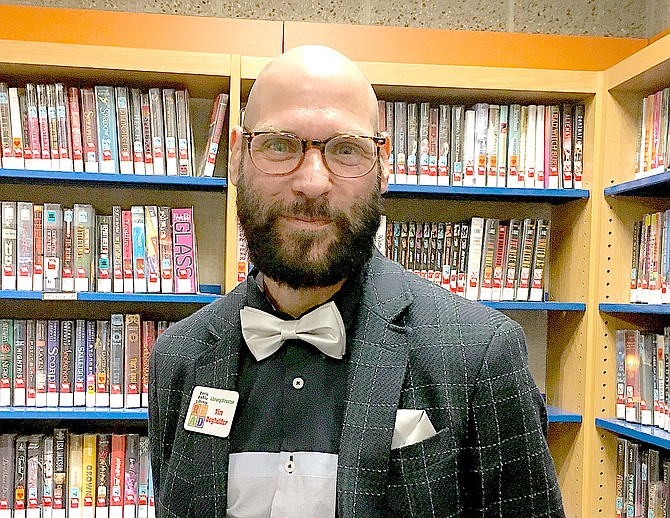 Tim DeGhelder at the Douglas County Public Library on Wednesday after an hour interview.

“It’s kind of majestic,” he said of what he saw on his trip from Reno to Carson Valley. “The drive from the airport was like a canvass that a painter could paint for the rest of their life. It’s beautiful, stunning and spread out.”

DeGhelder is on his way to becoming the first man to hold the position after trustees voted to extend an offer to him on Wednesday. Human Resources and the consultant will work on salary negotiations and a start date, Interim Director Christine Vido said.

Wearing a bow tie, DeGhelder was animated as he fielded questions from the Library Board of Trustees and the gallery.

DeGhelder was the only candidate interviewed in person on Wednesday after the other finalist Debra Greenacre couldn’t make it to Nevada.

Both were interviewed virtually the previous week. A scheduling conflict resulted in the in-person interview being moved up a few days, and Greenacre had a conflict.

DeGhelder has been director of the Paris, Texas, Public Library since June 2021.

He worked as a branch manager for 22 years at the St. Charles City-County Library District, which is home to a dozen branches in northeastern Missouri.

He said he semi-retired and taught English in Thailand for three years before taking the director job in Texas.

He has master’s degrees in public policy administration and library science.