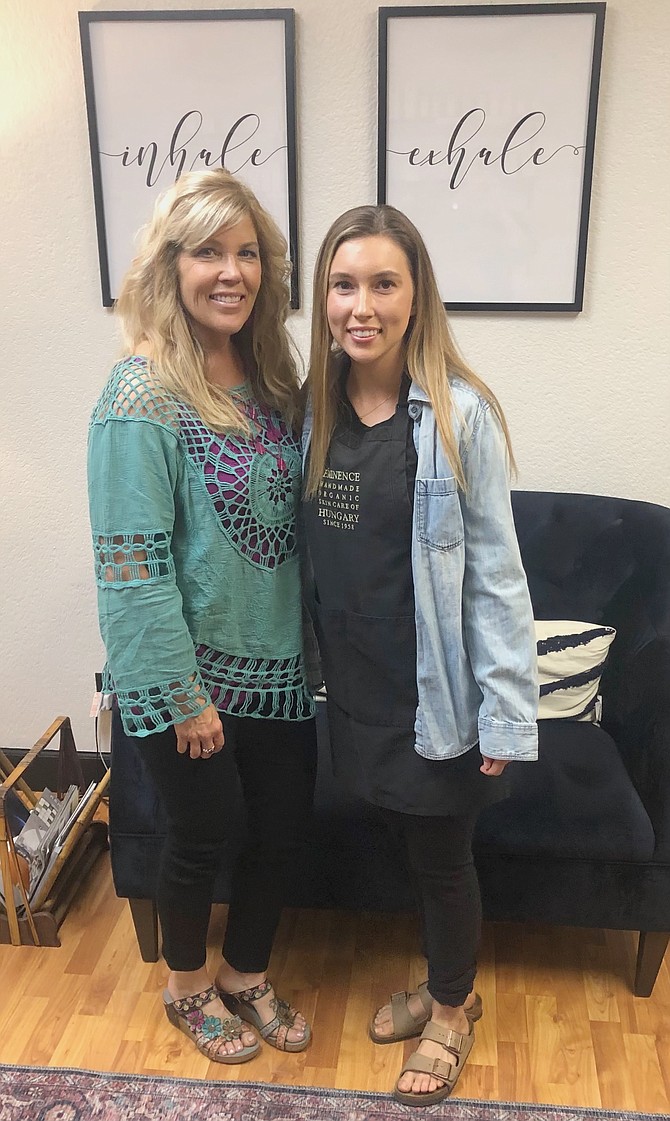 On May 19, Jessika Paige Skin Care and Jodi Wass Therapy host an open house at their shared location in the Mountain View Professional Center, 1528 Hwy 395, Suite 215 in Gardnerville. The event takes place from 4-6 p.m. during the Third Thursday Wine Walk, and light refreshments will be served.

Jodi Wass is a licensed marriage and family therapist and Jessika (Paige) Pollack is an aesthetician. The mother-daughter duo opened the doors to their new space on March 1 and said the venture is a manifestation of their collaborative vision to bring physical and mental wellness together under one roof.

Wass co-founded the Douglas Center for Hope and Healing in 2011. She dedicated herself to directing the grief center for 10 years before stepping down to focus solely on her private practice and make the transition toward semi-retirement. Wass maintained her office in the front suite of DCHH, which also housed an additional, unoccupied office.

The empty space filled Wass’ mind with possibilities, and she came up with an idea to create “a whole vibe for wellness and healing.” Wass approached Pollack to see if she’d be on board with helping turn the idea into reality.

“It was a natural fit,” Wass said.

The pair noted the challenges in creating a peaceful, relaxed environment in the middle of an office-type setting and drew inspiration from surrounding businesses, which include a yoga studio, massage therapy office, hair salon, nail salon, and an acupuncture/healing arts center.

“All the businesses around us have such uplifting, positive energy,” said Wass.

Wass said she has noticed increasing levels of anxiety and stress since the arrival of the Covid pandemic. In her MFT practice, she aims to provide people with healthy coping skills and guidance on how to live in the present moment. Clients are provided with strategies to maintain focus on what’s within their control and are encouraged to explore different ways to find peace and joy in each day.

In reflecting on her career as a mental health professional, Wass said what she loves most about her job is “empowering clients to reach their optimal goals of health and well being. Regardless of whether they come in after a loss, a recent divorce, anxiety…whatever their situation is, they are off track. And it feels really good to help them get back on track.”

Pollack graduated from Seattle’s Gary Manuel Aveda Institute in 2016. Although she enjoyed her time in WA, Pollack felt a yearning to be back among “the big, open blue sky and the mountains,” and returned home to NV the following year.

Around that same time, Pollack’s aunt was transitioning from a career in cosmetology to one in real estate and provided mentorship and training to Pollack as she was starting out. After working at Boheme Hair Lounge in Gardnerville for a year, Pollack decided she wanted to devote her energies completely to an aesthetician practice. She opened Jessika Paige Skin Care at O2 Yoga and Wellness in 2018 and expressed gratitude for having launched her business in such a caring and supportive environment.

Pollack loves the one-on-one interaction with her clients and incorporates face, neck, shoulder, arm, and hand massage into each treatment. Since the pandemic, she has noticed an increased need for physical touch and noted the important role it plays in addressing feelings of isolation.

“Now, (touch) feels more important than ever,” Pollack said, noting the benefits of  “…just allowing yourself to relax in that hour and let go.”

Pollack’s skin care sessions are customized for each client and utilize products from Eminence Organic Skincare, an all-natural Hungarian line made from plant-based ingredients.

Wass noted the significance of this business merging taking place as her career is winding down and Pollack’s career is just taking off.

“I could have never written this script…As a mother, who would have dreamt that I would actually get to share a (professional) space with my daughter? It’s serendipitous and special,” she said.

Wass can be reached by calling 775-450-2826, and additional information is available on her web page at jodiwasstherapy.com.

Pollack can be reached at 775-450-0413. Find her online at jessikapaigeskincare.com.

Sky gazers are in for a treat on May 15 when the sun, Earth, and full moon align to form a total lunar eclipse.

During the eclipse, light from the sun is blocked from reaching the moon as the moon moves through Earth’s shadow. This full moon is also known as a Blood Moon because of its reddish appearance during the eclipse.

In the Carson Valley, look east and watch for the moonrise just before 8 p.m. on Sunday night. Weather pending, visibility will increase as the full moon continues to ascend, and the eclipse will reach its peak at 9:11 p.m. No special viewing equipment is needed to watch this phenomenon, so try to step outside Sunday night and enjoy the show.