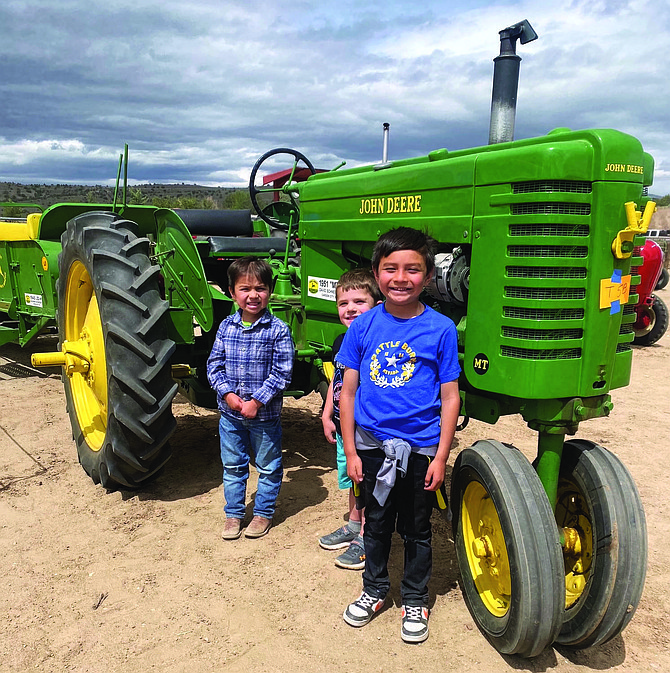 Aaron, Braxton and Andrew Lister pose in front of their favorite tractor at the Antique Tractor Power Show on Saturday at the Douglas County Fairgrounds in Gardnerville.
Haley Estabrook

After two years of cancellations, the Carson Valley Antique Tractor Power Show celebrated 25 years on Saturday at the Douglas County Fairgrounds in Gardnerville.

“The engines are absolutely awesome,” said club member Suzanne Schneider. “They worked them in the late 1800s to the early 1900s.”

This show was cancelled for the coronavirus outbreak and then was once again cancelled because of the Tamarack Fire.

They said they are overjoyed to be back.

“It’s wonderful, it is like going home again and you see all the familiar faces and people,” Schneider said. “I like to see the ones who come to look at the grounds and all because most of it is ranching and farming background, they’re just wonderful people. Carson Valley has supported us so much.”

Hosted by the Northern Nevada Antique Power Club, a nonprofit national organization that started in 2001, their goal is to stimulate interest in collecting, restoring, and displaying old machinery.

There were around 250 tickets sold to the show that featured more than 70 tractors and 30 engines over the weekend. The tractors ranged in vintage from the 1920s to the 1970s and came from seven different states to participate in the show.

“It’s awesome,” said Mickey Kreithe. “It brings back a bunch of memories from living in Southern California and going to the farm in the summer.”

“The show was very child friendly as a purpose of the club is to ‘help children understand where their food comes from,’” said Schneider.

The club has a membership available for $30 a year. This includes a club newsletter and membership in Early Day Gas Engine and Tractor Association.

They meet on the second Monday of each month. Meetings start at 7 p.m. and an optional dinner is served at 6 p.m.