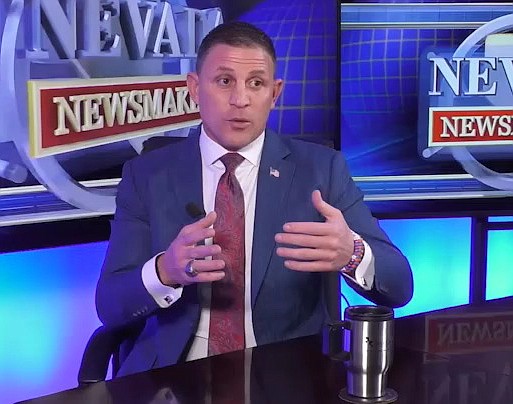 Joey Gilbert during his appearance on Nevada Newsmakers which aired Feb. 23, 2022.

With the final tally for the Nevada governor’s Republican primary in the books, any issue Reno attorney Joey Gilbert has with the election will have to be taken up with the courts.

On Thursday, Douglas County commissioners canvassed the vote in the race after a recount paid for by Gilbert.

Gilbert had already indicated to supporters that he didn’t expect much change in the vote totals as a result of the $191,000 recount, and that was certainly true in Douglas County.

County election workers recounted all the ballots the same way they did after Election Day, which took them 11 hours on June 30, the day after Gilbert sought a recount.

Burgans said the additional vote for Gilbert came from a candidate that was further down the ballot and that Lombardo’s vote total remained the same.

She told commissioners there were 60 ballots that required adjudication.

One example she gave was where a voter marked four candidates on a mailed ballot and then wrote “no” by three of them and yes by the fourth.

She said the number of votes matched the previous count exactly.

A rotating, bipartisan group worked on adjudication during the original count and the recount. Burgans said it was a different group.

“I think this really kind of proves it’s a good thing,” he said during public comment. “The machines worked, the people did a good job. One error out of that many votes is understandable. The system works and I think we should all be pretty happy with it.”

Burgans said Douglas County’s share of $3,304.04 hadn’t been paid by the Secretary of State’s Office.

However, she did announce that her office had received $176,000 from the state for the election and that would be going to the general fund.

Douglas County election workers wrapped up a recount in the Nevada Republican primary race for governor the day after Gilbert filed for a recount.