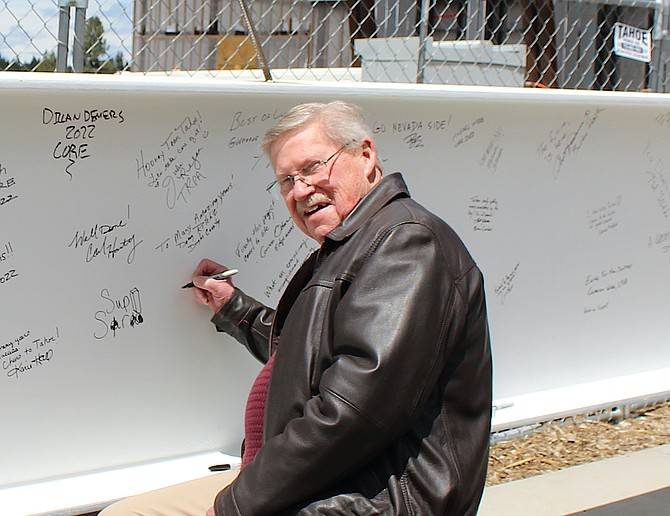 County Commissioner Wes Rice signs his name to a beam going into place in the Stateline Events Center.

Only one local race saw a change in results after the counting of 8,110 paper ballots in the week since Election Day.

Clerk-Treasurer Amy Burgans said Monday was the last day voters could cure signature issues with their ballots, which means there could be as many as 1,000 left to count.

“I don’t have an exact number but that is a best guess at this point,” she said. “We should have all ballots accounted for by (Tuesday) in order to process them.”

Unless one of them reaches 50 percent plus 1 votes in the final days of counting, Burns and Butterfield will meet again in November.

Both Douglas County Commissioner Wes Rice and Burgans remained safely in the lead after the additional ballots were counted.

Results in a couple of races already decided statewide were reversed by the additional votes in Douglas, whose initial results gave wins to the underdogs.

As of Sunday morning, Adam Laxalt was ahead 139 votes over Sam Brown in the U.S. Senate primary and Sheriff Joe Lombardo up by 141 votes over Joey Gilbert for governor.

Both those counts could change with paper ballots.

Douglas County commissioners are scheduled to canvass the vote 4 p.m. Friday, officially drawing the primary election to a close.

Douglas is on its way to fifth place among the Silver State’s 17 counties in turnout, according to the Nevada Secretary of State’s Office.

Eureka, Lincoln, Storey and Esmeralda counties added up to a total turnout of 4,056 votes. That’s the equivalent to a quarter of the people who turned out to vote in Douglas.