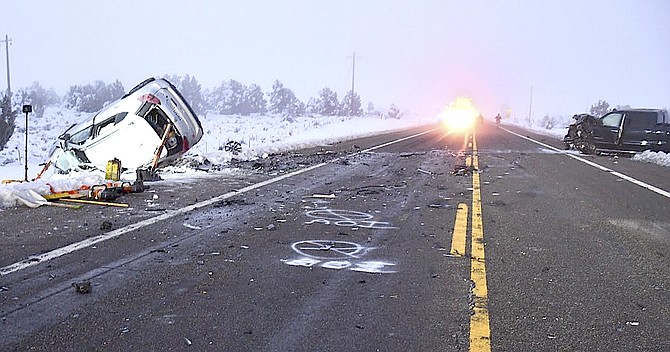 The scene near Leviathan Mine Road on Saturday morning. Nevada State Police photo

Update: A Gardnerville man was killed in a head-on collision that occurred on Highway 395 near Leviathan Mine Road on Saturday morning.

Kevin Skogmo was southbound on the highway at around 5:10 a.m. when an oncoming 2018 GMC Sierra K2500 Denali pickup truck driven by Paul Simpson crossed the center line and into the path of Skogmo’s Nissan Rogue, according to the Nevada State Police.

Simpson remained on the scene and is cooperating with law enforcement.

If anyone has any information about this crash, please send an email to ncwmirt@dps.state.nv.us and reference the case number.

Nearly five hours after a fatal collision was reported on Highway 395, the only route through the Pine Nut Mountains  reopened at around 10:10 a.m. Saturday.

The Record-Courier has reached out to the Nevada State Police to learn more about the the sixth highway fatality in Douglas County during 2022.

A traffic camera at Leviathan Mine Road showed traffic was moving as the collision was cleared at 10:10 a.m. Saturday.

First reported at 5:14 a.m., the collision closed the highway, backing up traffic going both directions.

With Monitor Pass closed for the season, there is no practical detour around the collision that doesn’t involve going through Yerington, Dayton and Carson City.

As of 6:30 a.m., no details have been released about what happened.

It’s the second time the highway has been closed for a major collision in under 24 hours.

On Friday, Highway 395 was shut down for around an hour near Muller Lane north of Minden for a two-vehicle collision reported around 9:10 a.m.

The driver of one vehicle was reportedly trapped after it was knocked on its side in the southbound lane.

The wreck backed traffic up to Airport Road as motorists turned onto Genoa Lane to bypass the closure.

Not long after Care Flight safely took off with an injured person from the Minden crash, another occurred on Main Street in Genoa near the Genoa Post Office at 9:52 a.m.

That collision reportedly involved three vehicles. One person was evaluated but declined an ambulance ride for treatment.