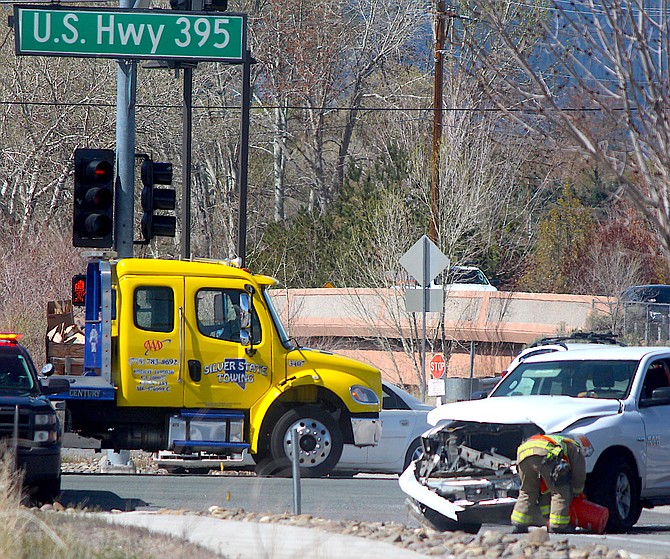 An East Fork firefighter renders a Dodge pickup involved in a collision safe around 10:40 a.m. Saturday at Riverview and Highway 395. An earlier accident on the highway near Airport Road resulted in a death.

Impairment is suspected in a wrong-way collision that killed a Douglas High School graduate on Highway 395 north of Minden early Saturday morning.

The driver of a pickup was driving north in the southbound lanes of Highway 395 near Airport Road at around 4 a.m. Saturday when the collision with a sedan occurred, the Nevada State Police said on Tuesday.

Sedan driver Fallon Montanucci was declared dead at the scene in the collision.

Both the pickup driver and a passenger in the sedan were transported to Renown Regional Medical Center via Care Flight helicopter.

East Fork firefighters arrived on scene of the two-vehicle collision to find one with a small fire in the engine compartment and both with major damage.

Firefighters had to employ the jaws of life to cut the victims out of both vehicles and to extinguish the fire.

“Any scene with multiple extrications can be difficult and the guys did a great job on this one,” Battalion Chief Troy Valenzuela said on Saturday afternoon.

Three East Fork engines and two ambulances responded to the collision, along with Douglas County deputies.

The collision is being investigated by the Nevada State Police.

Montanucci graduated from Douglas High School in 2018. She was a member of the Douglas County Sheriff’s Explorers.

None of the other occupants of the vehicles were identified on Tuesday before press time.

According to the state, Saturday’s is the first highway fatality in Carson Valley in 2022.

Several collisions occurred on Monday, but there were no serious injuries reported.