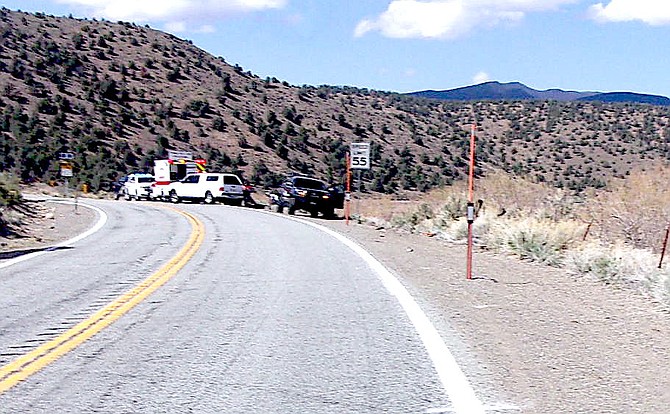 A curve near the Nevada state line in southern Lyon County was the scene of a crash that killed a Douglas County man. NHP photo

A service is 11 a.m. Saturday for East Valley resident Robert Glover Purvis, 66, who was identified on Monday as the victim of a motorcycle accident by the Nevada State Police.

Purvis was riding a 2013 Harley Davidson motorcycle north on Highway 338 near the state line when he failed to negotiate a curve and went off the west side of the highway. The motorcycle hit a speed limit sign and overturned, throwing Purvis to the ground.

He was pronounced dead at the scene.

A celebration of life is scheduled to take place at Life Point Church on Stephanie Way.

• The identity of a man, who was killed after he drove a blue Explorer into a tree in the Pine Nut Mountains early Sunday morning, has yet to be released.

According to the Nevada State Police, the man was driving near the southern side of Double Spring Flat when he left Highway 395.

The Explorer travelled 200 feet off the road before hitting a tree.

Douglas County Sheriff’s deputies and East Fork medics responded to the scene. The collision is under investigation by the Nevada State Police who cleared the scene at around 7 a.m.

It was the second fatal collision on Douglas County highways in 2022 and the third involving a Douglas resident.