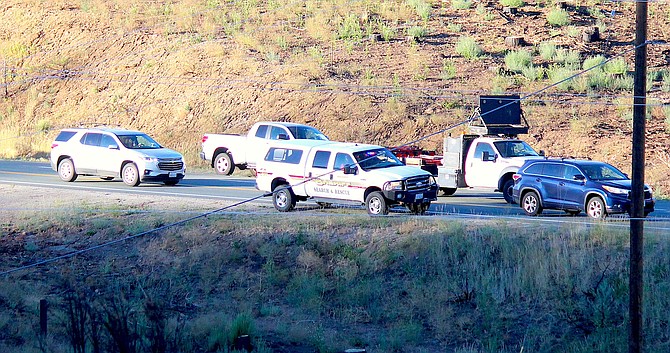 The first convoy of vehicles from Markleeville arrived at Turtle Rock Park just after 7 a.m. Friday.
Photo by Kurt Hildebrand.

The first convoy of around 10 vehicles from Markleeville to Turtle Rock Park arrived a few minutes after 7 a.m. Friday escorted by an Alpine County Search and rescue vehicle.

Another half-dozen vehicles were escorted the other way around the spot where Highway 89 washed out after heavy rain fell on the Tamarack Fire burn scar Aug. 3.

If all goes well, the road could be complete as early as Aug. 22, Alpine County spokesman JT Chevallier said on Friday.

CalTrans workers will be digging down 20 feet to install the base for the 8-foot-wide culvert. They will have to shore that up as they go so the sides don't fall in on them.

The bypass around the construction site is around a tenth of a mile located southwest of the road near where Millberry Creek crossed.

Work on the bypass route has made it passable by four-wheel drive with an escort.

On Thursday, a 100-foot long, 8-foot-wide culvert arrived at the site, according to the California Department of Transportation.

“This is great news for the community, which has been without full access on Route 89 since Aug. 3 when a storm created mud slides and debris flows in the Tamarack Fire burn scar area,” transportation officials said.

Under a timeline established Monday, work to finish installing the culvert should be completed the week of Aug. 22, assuming no mishaps occur, according to CalTrans.

The U.S. Postal Service announced Thursday it has reopened the Markleeville Post. Operations were temporarily suspended due to flooding.