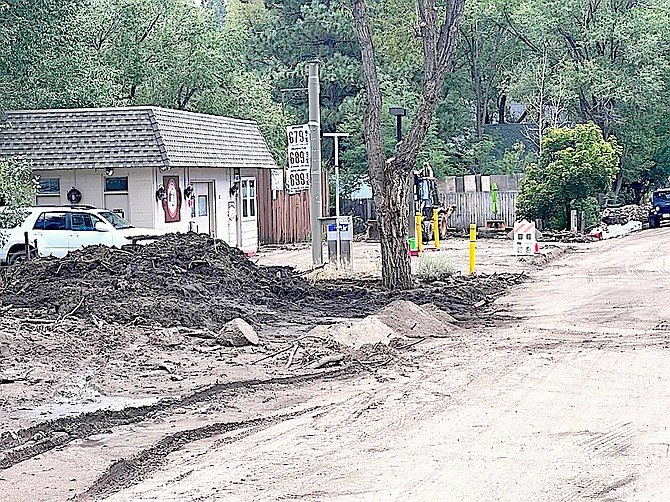 Downtown Markleeville on Sunday was still pretty muddy. Residents say now that it has dried out even vehicles doing the speed limit are kicking up dust.
Brad Coman | Special to The R-C

Update: A 100-foot long, 8-foot-wide culvert has arrived in Alpine County, according to the California Department of Transportation.

Workers are building the base required to shore up the culvert today. The two-week time line still stands.

"This is great news for the community, which has been without full access on Route 89 since Aug. 3 when a storm created mud slides and debris flows in the Tamarack Fire burn scar area," transportation officials said.

The U.S. Postal Service announced it has reopened the Markleeville Post. Operations were temporarily suspended due to flooding.

CalTrans loads up the big culvert in Ione, Calif., on Thursday.

“CalTrans do you have a response?” was the quote of the morning as Alpine County supervisors ratified an emergency declaration on Wednesday morning.

The real question is whether an emergency road completed Monday can be improved to the point where residents can use it to bypass where Highway 89 has been washed out while work is completed on a culvert that will allow the road to reopen.

Installing the culvert is a temporary fix, according to California Department of Transportation Supervising Transportation Engineer Pam Marquez speaking at the supervisor meeting.

An 8-foot diameter culvert is being inspected in Ione and will be transported to Markleeville for installation allowing Highway 89 to reopen in 2-3 weeks.

The 4-foot culvert for the Millberry Creek crossing northwest of town was being replaced when a downpour over the Tamarack Fire Burn washed out the highway and sent mud and water into the town.

Marquez said she would consult and have an answer on whether the old highway route could be made safe enough for some one-way traffic by Thursday.

Supervisors also approved a resolution that transferred $65,000 in tobacco money to the Chamber of Commerce for distribution to residents and businesses impacted by the Aug. 3-4 event.

Eastern Alpine Fire Chief Terry Hughes said that residents of Horsethief Circle living above Foothill Road were hoping they could get some funding for fuel as neighbors help them dig their home out.

He expressed concern that the mountain above the cul-de-sac that begins in Nevada and ends in California might continue to slide.

Meanwhile, residents reported that Monitor Pass was closed while a film crew worked, blocking the only route between Markleeville and Gardnerville.

Sheriff Tom Minder said he would contact the crew and see if he could convince them to delay filming until the highway fully opens.

At least one resident of Markleeville reported her basement was full of water as a result of the flooding.

Community Development Director Sam Booth said a survey is on the department’s web site for residents to report damage.