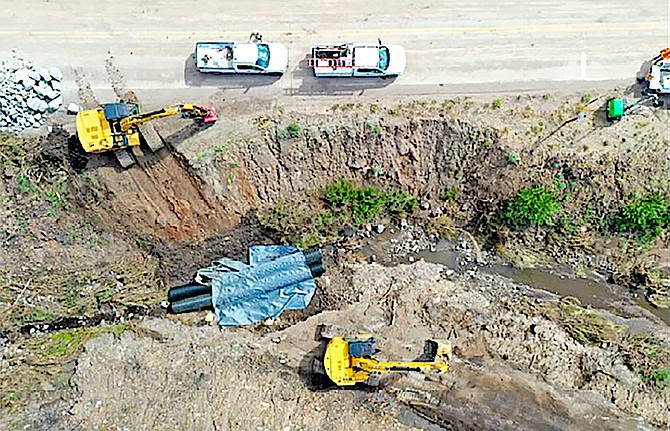 A view from above of the damage of Highway 89. CalTrans photo

The estimate for reopening Highway 89 from Markleeville to Woodfords has been reduced to 2-3 weeks, according to a statement issued by the California Department of Transportation just before noon on Monday.

The road is washed out at Millberry Creek, which travels along Highway 89 before crossing above the historic town.

CalTrans officials said the state has enacted an emergency order to install temporary drainage on the main route between the Alpine County seat and the rest of the world.

“Construction crews have started and will work 12-hour shifts, seven days a week to install the new drainage facilities and repair the road,” CalTrans said. “The estimated time of reopening both lanes is significantly reduced from 5-6 weeks to 2-3 weeks, perhaps sooner. This schedule is subject to change due to traffic incidents, weather, availability of equipment, and materials and construction related issues.”

The order also calls for the construction of a temporary road following old Highway 88 for emergency responders only, according to the state.

Health services for Markleeville residents are located in the administration building located at 99 Water St., Markleeville on Tuesdays and Thursdays from by appointment only. Appointments may be made by calling 530-694-2146.

The U.S. Postal Service will be conducting a safety inspection of the Markleeville Post Office to certify the building for operations. After the building is certified for occupation, the USPS will resume operations in Markleeville. Estimated time for reopening is still to be determined. Hours of operation will be limited due to additional travel time and staffing.

It could be more than a month before Highway 89 reopens, Markleeville residents heard on Saturday morning.

“That lane is undermined to the point where we have another event … it’s just not safe,” CalTrans representative Bob Highfill told a town hall meeting in Markleeville.

State workers will install a larger box culvert on Highway 89 at the entrance to the historic town. That process could take 4-5 weeks.

Highfill said it will be days before crews start working on the actual project that would open the highway.

Very nearly the entire town turned out at the town hall.

Crews were working on an alternative route into town in hopes of having emergency access by Wednesday.

Highfill said a temporary bridge brought to help improve access ended up being short of the 55 feet required for the span. He said bringing in a new temporary bridge would take as long as installing the culvert.

Alpine County Water System Manager Buck McClellan said there was a significant amount of sediment in the treatment plant which reduces the amount of water available to the town to its two wells. He said he hoped the issues would be corrected by Monday.

McClellan raised the issue of fire protection while the road is out.

“We are still in fire season,” he said. “You need to understand the burden you’ve put on the residents,” he said. You need to get multiple contractors to get a temporary road to go now, because the Forest Service station and the Woodfords station are on the other side and we’re still in fire season. You need to look a little deeper at what the coffers of CalTrans have. I don’t think the answers I’ve heard today are acceptable.”

Concerns about mud clogging the sewer plant were raised on Saturday. A contractor was expected to make the run over Monitor Pass on Saturday to pump the five feet of sediment out. Alpine officials confirmed that the plumber would be able to make it there with a truck.

Besides water and sewer, residents are also facing challenges to get mail, groceries, and in several instances help clearing the mud and debris from their homes.