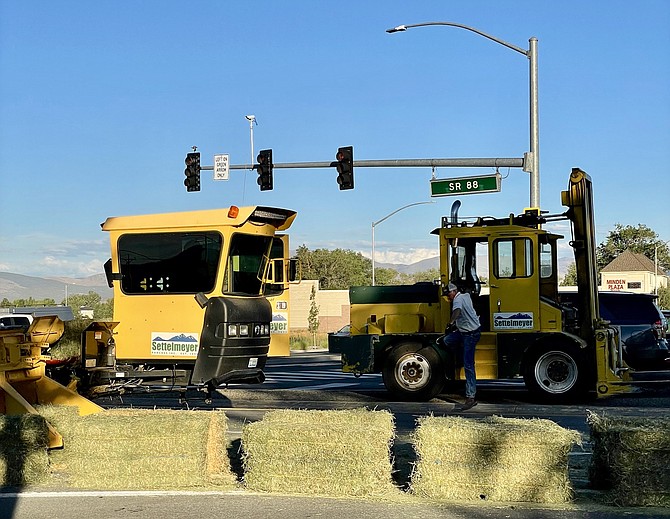 Resident Marilyn Smith took this photo of work to clear up a hay spill at highways 395 and 88 in Minden on Thursday evening.

Genoa, Nev. — The first convoy of vehicles between Markleeville and Woodfords will be escorted by the Alpine County Sheriff’s Office 7-7:30 a.m. Friday over what I’ve heard called old Highway 88. Residents and county employees with four-wheel or all-wheel will undergo inspection to see if their vehicles will handle the route before the trip, which will be repeated 6-6:30 p.m.

I went on a search for the famous culvert on Thursday but couldn’t find it. I suspect it’s sitting on the job site waiting for prep work to finish so they can drop it in the hole. The culvert’s twice as big as the old one, but not quite as big as the 10-foot concrete box culvert that will eventually take Millberry Creek to the other side of Highway 89.

In Minden, a hay truck overturned around 6:20 p.m., apparently while turning from Highway 395 onto Highway 88. Sen. James Settelmeyer brought his equipment over and helped clear up the mess. The highway was closed for more than an hour.

A score of earthquakes eight miles southeast of Topaz Lake was kicked off by a 3.2 magnitude temblor around 8:40 p.m. Thursday. That spot has been shaking since Monday’s 4.4 magnitude quake.

The 2022 Main Street Event kicks off in downtown Minden at 4 p.m. today, with all sorts of cars, music and food on Esmeralda and around the park. Over in Gardnerville’s Heritage Park, “Jumanji” is playing on the new pavilion screens at around 8 p.m.

I spent 40 minutes looking for Perseid meteors this morning and maybe saw four, in addition to a couple of planes and several bats. There are a lot of trees around my house, and I’m not much of a sky watcher, but it was a nice way to start the day.

Expect sunny skies today with the wind out of the west at 10-15 mph gusting to 25 mph this afternoon. The chance of showers is holding for Tuesday and Wednesday, but we’ll see.