Hello winter What are you doing back? 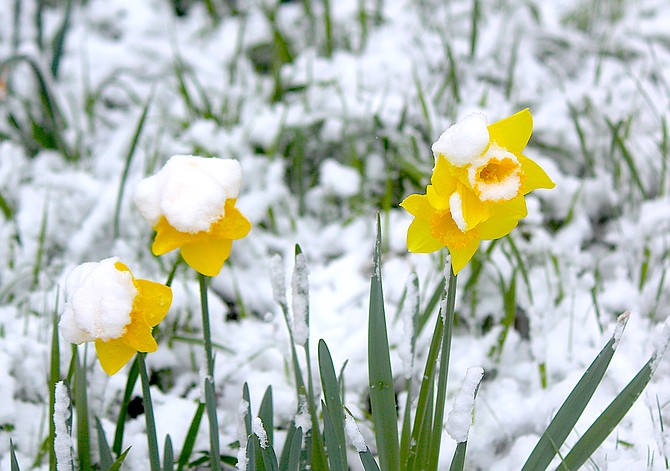 Carson Valley’s fruit crop likely took a hit on Monday as a spring snowstorm brought freezing temperatures just as the blossoms were setting.

“Subfreezing overnight temperatures will impact irrigation systems, pets, people and plants through Wednesday morning,” according to National Weather Service Meteorologist Amanda Young. “The very cold air mass that arrived (Monday) behind the cold front will leave us feeling quite cold with temperatures that are closer to January averages than mid-April.”

Forecasters said that Monday won’t mark the end of wintry weather as they anticipate another storm today.

“Evening snow and snow showers will develop across the Sierra later (tonight) and Thursday morning,” Young said. “There is moderate confidence that snow accumulations will produce snow-covered roads and bring mountain travel impacts for the Thursday morning commute over the region’s passes.”

Monday’s storm snarled Lake Tahoe highways, with vehicles sliding into one another in slick conditions.

At one point, a Douglas County deputy got up to four as he was counting the cars colliding on Kingsbury Grade at Buchanan around 3:50 p.m.

Traffic over the Grade slowed to a standstill with at least one commuter saying they were stuck for more than an hour.

The storm rode high winds into Western Nevada on Monday, opening at around 6 a.m. where the Weather Service reported a gauge located 2 miles south of Minden recorded a 79 mph gust.

Winds in central Carson Valley picked up again around 1 p.m. with a 64 mph gust recorded near the base of Kingsbury and an 85 mph gust at Heavenly Mountain Resort.

A rain gauge about a mile north of Genoa recorded a fifth of an inch of precipitation.

Foothill resident Jeff Garvin reported .22 inches of precipitation with about three-quarters of an inch of snow on Monday.

Garvin said it was 17 degrees at his place on Tuesday morning. Topaz Ranch Estates resident John Flaherty reported a low of 19 degrees.

Most places across the Valley saw less than a half inch of snow from the April storm.

Douglas County has been mired in a rare winter drought that only saw .38 inches of precipitation since Jan. 1 where the average is 4.47 inches.

Irrigation season began on April 1 and Minden recorded new high temperatures on April 9 and 10 at 79 and 80 degrees. Warm temperatures accelerated the melt-off of the snowpack, but this week’s colder temperatures will apply the brakes for a bit.