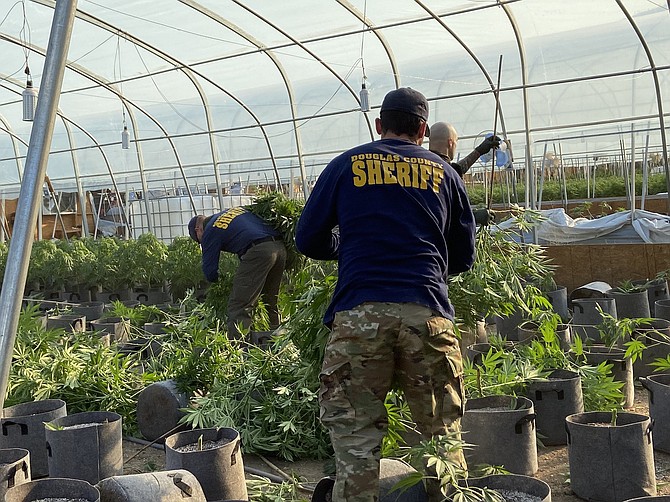 It was all hands on deck on Monday as authorities raided an illegal marijuana grow in the Pine Nuts.

Chinese nationals associated with organized crime are believed to be involved in an illegal grow that resulted in the seizure of nearly 62 tons of marijuana Monday from a site behind Bodie Flats south of Gardnerville, according to the Douglas County Sheriff’s Office.

“Marijuana is legal in Nevada, but is highly regulated,” Douglas County Sheriff Dan Coverley said. “This marijuana grow was well outside any legal marijuana grow permitted by Nevada Statutes. The most alarming aspect of this case to me is the deplorable condition the workers lived and worked in and the potential negative environmental impact caused by the unregulated fertilizer and waste. No matter what your stance is on marijuana this operation, and the total disregard for the environment, was a stain on the beautiful valley we live in.”

Two search warrants were served by local, state and federal agencies as a result of a lengthy investigation.

The early morning raid resulted in 80 people being detained and two arrests, one for an immigration violation and another for possession of a controlled substance other than marijuana.

Estimates of the street value of the nearly 62 tons of marijuana are in millions of dollars.