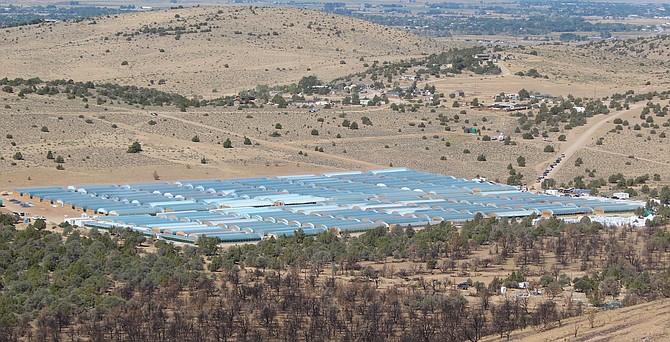 Federal authorities line up on Courtland next to an alleged large marijuana grow in the Pine Nuts between Bodie Flat and Pine View Estates on Monday morning.
Photo by Kurt Hildebrand.

A long line of law enforcement vehicles rolled up Courtland in Bodie Flat on Monday for a pre-dawn raid on what neighbors have described as a marijuana grow.

Neighbors have been complaining about the scores of hoop houses that is allegedly on Washoe Trust land owned by the Snooks family.

Grow lights illuminated the grow through the night, according to several people who had come across it over the last year.

"The Drug Enforcement Administration Reno Resident Office, along with other Federal, State, and local law enforcement partners served a federal search warrant early this morning and removed a large illegal marijuana cultivation operation on federal land," according to a statement issued this morning. "There were approximately 160 greenhouses spanning over 22 acres."

Radio traffic indicates several people have been taken into custody in the drug raid with the aid of Douglas County Sheriff’s deputies.

WOW.....If we only had that many law enforcement officers down on the southern border.