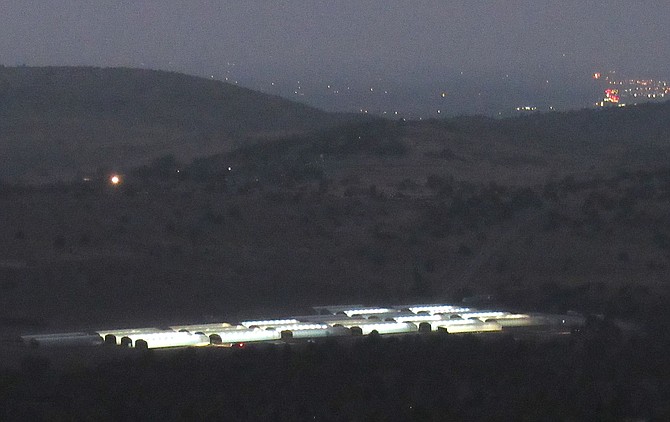 Pine View Estates residents have been watching the progress of an alleged marijuana grow raided by federal authorities on Monday for more than a year.

According to documentation provided by Pine View Estates neighbors, there were fewer than 30 greenhouses on the property when residents first started documenting the grow in August 2020.

Chinese nationals associated with organized crime are believed to be involved in financing the grow that resulted in the seizure of nearly 62 tons of marijuana, according to the Douglas County Sheriff’s Office.

Each of the houses included a hydroponic tank used to feed the plants.

Built using metal frames and plastic with plywood ends the grow houses kept increasing in number doubling by mid-October to 60.

By Christmas the number of grow houses had tripled to nearly 90, according to a late November photo taken by a resident.

By April of this year the number of hothouses had grown to 120 and was well on its way to reaching the 160 number the Drug Enforcement Agency listed on Monday.

One resident said he was able to drive right up to the grow, located in the Pine Nuts and actually talked to people who were working there.

He said the workers were living in storage containers that only had one door and a window with bars on the windows.

“People would go out there to get out into the Pine Nuts and this created a big public nuisance right in the middle of it,” he said.

Residents reached out to The Record-Courier back in November about the pot farm, which featured grow lights that lit up the sky above the location, pointing out that there were children living within 750 feet of the location.

“We are very concerned about health and safety, the environment and the water table,” he said.

On Monday, resident Laura Fillmore said she saw the line of law enforcement vehicles headed up Courtland to the grow.

“We feed a horse up there and have been watching the drill and drill for water,” she said. “(There was) much tree die-off where they found water. (This) affects all allotment owners in the area.”

The early morning raid resulted in 80 people being detained and two arrests, one for an immigration violation and another for possession of a controlled substance other than marijuana.

Estimates of the street value of the nearly 62 tons of marijuana are in millions of dollars. The Sheriff’s Office said there were 16,066 plants in all.

“These illegal marijuana grows destroy and wreak havoc on our land, water, and wildlife and ultimately impact the natural environment within our communities,” DEA Public Information Officer Nicole Nishida. “Large illegal grow operations leave a trail of caustic chemicals and tons of toxic rubbish that permeate the land. They also divert important water resources and destroy much needed watersheds.”

The mountains around Carson Valley have been the site of a few large marijuana grows over the years.

In 2014, Alpine County officials uprooted 4,000 plants being cultivated between Woodfords and Markleeville. In 2012, Douglas County and U.S. Forest Service Rangers interdicted a grow above Jacks Valley.

I'm glad our government law enforcement can travel at the speed of a tortoise with two broken legs.