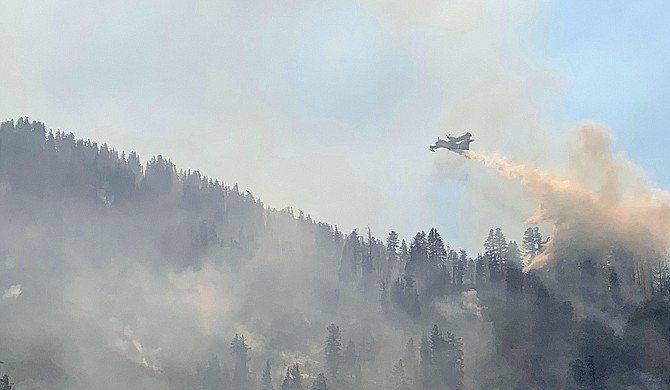 A super scooper in action over the Caldor Fire. U.S. Forest Service photo

The Caldor Fire didn’t grow an inch overnight on Monday, sticking at 219,267 acres with containment reaching 68 percent, according to the Tuesday morning update.

The fire has only grown 317 acres over the course of two days, mostly around western Alpine County northwest of Caples Lake.

According to a statement issued at 10 a.m., Highway 88 from Kirkwood Meadows Drive westbound will remain closed due the Caldor Fire.

The effort to battle the fire directly has increased the number of first-responder injuries to 16, up two from Sunday.

“Winds last night were calm and out of the east, with occasional gusts to 15-20 mph,” fire officials said Tuesday morning of the fire’s eastern portion. “Firefighters continued to mop up and patrol the fire perimeter especially in areas with any remaining hot spots or uncontained edges. Firefighters continued to ensure that the fire remained in its current footprint.”

Today, firefighters will work to build line and mop up on the uncontained fire edges northwest of Caples Lake and on the east side of Trimmer Peak, officials said.

El Dorado County downgraded evacuation orders for areas on the west side of the fire near Ice House Road and Happy Valley.

Evacuation warnings were updated on Tuesday to include Highway 88 from Picketts Junction to Kirkwood and the Alpine County Line.

Other areas affected are Red Lake, Caples Lake and Kirkwood.

Wilderness and forested areas south of Highway 88 and west of Blue Lakes are also affected by the warning, as is Highway 89 from Pickett’s Junction to the Alpine County Line and Picketts Junction Northeast to Fay Luther Canyon.

Evacuation warnings have been lifted for Sorensen’s east to the Nevada state line.

The evacuation shelter at the Reno-Sparks Convention Center was closed by the Red Cross on Monday night.

There is still a temporary emergency order for the Eldorado National Forest through the end of September.

The date for containing the fire remains Sept. 27.