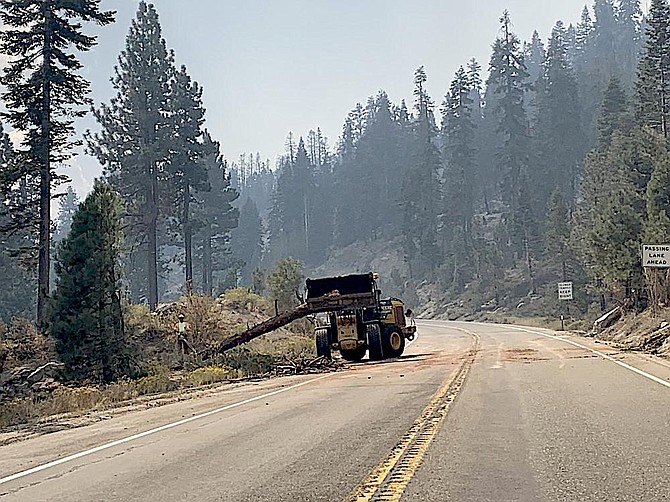 Workers are clearing dead trees from along Sierra highways before they reopen. U.S. Forest Service photo

Highway 89 from Picketts Junction in Hope Valley to Meyers has reopened after being closed due to the Caldor Fire. Since midnight, most of the burning on the fire has been north and south of Strawberry Creek north of Kirkwood.

Both highways 50 and 88 over the Sierra remain closed this morning.

Foresters are working to clear dead trees along the highways before either will reopen.

The fire appears to be burning just under two miles northwest of Kirkwood on the northern flank of the section that burned along Highway 88 and Caples Lake. The fire is also continuing to burn about four miles northwest of Caples Lake, according to the Fire Information for Resource Management System mapping as of 6:30 a.m. Monday.

The mapping indicates there is a hot spot within the fire’s perimeter two miles due west of Highway 89.

According to Monday morning’s situation report, the fire grew 503 acres in the last 24 hours, reaching 219,267 acres. It was 67 percent contained.

Firefighters are starting to demobilize from both the Caldor and Dixie fires. The Caldor Fire claimed 1,003 structures during its rampage up Highway 50 and over Echo Summit and has cost $158 million to extinguish.