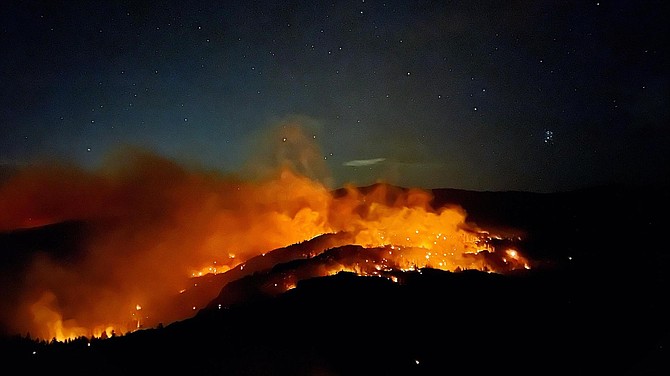 The fire officially grew 461 acres over the last 24 hours to 218,950 acres. Most of the active fire is burning northwest of Caples Lake, according to this morning’s mapping on the Fire Information for Resource Management System operated by the U.S. Forest Service and NASA.

“Conditions overnight were mild and the southwest wind shifted to a south wind during the night,” fire officials said about the eastern portion of the fire on Sunday morning. “Fire behavior consisted of smoldering and creeping surface fires. Crews continued to patrol, hold and improve fire lines from Trimmer Peak down to Highway 89. Hot spots in the area of Trimmer Peak will be a primary focus along with strengthening the line.”

Firefighters will focus securing Trimmer Peak down to Highway 89.

Evacuation orders remain in effect for areas along Highway 88, including Red Lake, Caples Lake and Kirkwood. The wilderness and forested areas south of Highway 88 and Blue Lakes, including Sisters, Fourth of July Peak and canyon, Devils Corral, Winnemucca Lake, Frog Lake, Emigrant Peak and Elephants Back also remain under an evacuation order.

All evacuation warnings for Douglas County were lifted on Saturday.