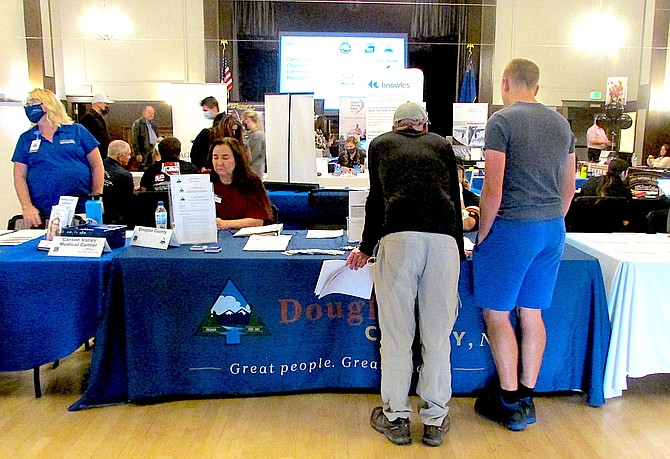 About 30 people came to Thursday's Job Fair and Expo at the CVIC Hall in Minden. The event was sponsored by the Carson Valley Chamber of Commerce.
Photo by Sarah Drinkwine.

About 30 people turned up for a Job Fair and Expo on Thursday at the CVIC Hall. The fair was sponsored by the Carson Valley Chamber of Commerce.

At a 4 percent unemployment rate, the fourth highest in the state, there are still more jobs than workers in Douglas County.

According to figures released by the Department of Employment, Training and Rehabilitation, there were 868 Douglas County residents out of work out of 21,854 in the official labor pool during September. Those figures don’t include residents whose benefits have expired or who have stopped looking for work.

While all of the listed jobless live in the county, a portion of the 20,986 employed workers live elsewhere and commute to Douglas.

Those figures reflect the end of all federal benefit pandemic extension program on Sept. 11.

Taxable sales figures showed Douglas County continued to chug along during August with an increase of 6.7 percent to $84.38 million.

According to the Nevada Department of Taxation, food services and drinking places posted an 11 percent gain to $12.28 million, while accommodations were up 50 percent to $3.9 million. Much of that money is raised at Stateline, which felt most of the impact of the Caldor Fire evacuations and closure of Highway 50. Those numbers won’t be released until next month.

What likely won’t be affected by the fires are taxable sales at general merchandise stores, which were up 3 percent to $10.8 million. Nonstore retailers were up 10.6 percent to $8.4 million in a category that includes online sellers like Amazon.

Motor vehicle and parts dealers saw a 27.3 percent jump in sales to $5.3 million. While Douglas County has several auto parts dealers, there is only one small car dealership in Gardnerville.

Taxable sales were up 2.8 percent for the year compared to July and August of 2020.

Douglas County raised $1.245 million in tax revenue during August, short of the $1.294 million it is guaranteed by the state based on its population. Because it is a guaranteed county, Douglas receives the same amount in revenue from the state regardless of what its merchants raised.