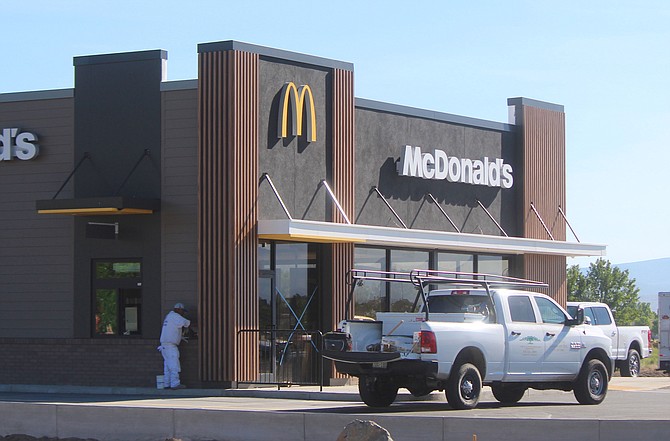 A worker does finishing work on the new Minden McDonalds last week. The restaurant is expected to open before the end of June. Photo by Kurt Hildebrand.

In the decades that the state has been keeping records, the gambling win in Stateline has always been far and away higher than that in the East Fork and Carson City townships.

Until April 2020, that is, when in the middle of the coronavirus lockdown the Stateline casinos reported a total win of $80 during the month, compared to the two townships, which brought in $2,169.

Things were back to near normal in April 2021, with Stateline casinos bringing in $21.76 million, compared to the townships $11.59 million.

So far, the Stateline casinos are up 17.71 percent from last fiscal year with a total of $206.3 million. That gap should increase when May numbers are released by the Gaming Control Board later this month.

On the anniversary of the St. Patrick’s Day coronavirus lockdown, Douglas County merchants joined the rest of the state in posting a huge surge in taxable sales, according to figures released last week by the Nevada Department of Taxation.

A key source of that increase was the nearly doubling of sales in the food services and drinking places, which raised $11.28 million during the month. Driven by the Stateline casinos, accommodations also posted a big increase, up 127 percent to $2.90 million, while amusement, gambling and recreation sector went up 222 percent to $1.45 million.

General merchandise stores took first place as the county’s largest sector with $11.37 million in taxable sales during the month, up 27 percent. Sales include those from both Douglas Walmarts and the Target.

Nonstore retailers continued to benefit from habits developed during the lockdown, with $9.5 million in sales, up 55 percent from March 2020.

Motor vehicle and parts dealers had $6.1 million in taxable sales up 162 percent from the previous year, while building materials, garden equipment and supplies was up 51 percent to $6.5 million.

While not quite as exuberant, the county’s industrial sectors generated increases in March with merchant wholesalers of durable goods up 12.4 percent.

Douglas County taxable sales are ahead 15.5 percent for the entire year.

While Clark County saw a 45.4 percent increase to $4.6 billion in March, it is still behind the previous year by 3.7 percent.

Washoe Count was ahead 49.4 percent in March with $1 billion in taxable sales. So far Washoe is ahead 13.6 percent with $7.9 billion for the year.

As a guaranteed county, Douglas relies on the state for a small part of its tax distribution. In March, the country raised $1.25 million and received $1.309 million in consolidated taxes.

Douglas County had a 5 percent unemployment rate in April, with 1,142 people still receiving benefits. According to the Nevada Department of Employment, Training and Rehabilitation, there were 23,059 people employed during the month.