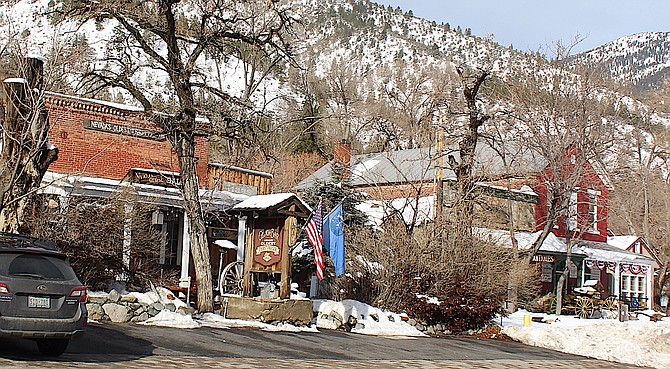 Snow piled up in front of Nevada's oldest business district is a good sign for prosperity in the county.
Photo by Kurt Hildebrand.

So far, it seems cutting Douglas loose from state sales tax umbilical has been a good bet.

County merchants reported $91.57 million in taxable sales for the month of October, up 11.7 percent from the same month in 2021.

Up until July 1, 2022, that number would have been essentially irrelevant since the county received support based on its population rather than its actual collections.

The county’s manufacturing sector posted good gains with a 69.4 percent increase in wholesalers of durable goods to $9.4 million, rivaling the county’s typically biggest sector related to tourism at Stateline.

The county’s tourist trade brought in $11.13 million from food services and drinking places, while accommodations were up $3.74 million and amusement gambling and recreation posted $1.24 million during the month.

Even with a 2.2 percent decrease, general merchandise stores posted $9.55 million, while online sales were up 16.7 percent bringing in $9.56 million in taxable sales.

Building materials, garden equipment and supplies raised $7.78 million up 17.6 percent during the month. Despite not having a single car dealership, the county’s motor vehicle and parts dealers raked in $5.29 million. That may be a result of vehicle purchased outside the county that are credited to Douglas residents.

The county received $1.5 million in revenue related to the sales in October for $9.98 million so far in the first third of the 2022-23 fiscal year.

Stateline posted one of the few positive results for gaming numbers during the month of November, which was reported at the end of the year.

The main source of Douglas County’s gaming revenue was up 8.24 percent to $19.66 million according to the Nevada Department of Taxation. Only Sparks and Wendover reported positive takes compared to November 2021.

The state reported a jobless rate of 4.2 percent representing 898 workers in Douglas. The Department of Employment, Training and Rehabilitation said there was a labor force of 21,397 workers during November, down from 25,662 in October.

Carson Valley documented a 16 percent decrease in production of new homes during 2022 with home values seeing a growth in demand of 5 percent, according to Chase International.